We're a Team! (also known as We're the Best Team Ever!) is the 12th episode of Dora the Explorer from Season 4.

Dora, Boots, Benny, Isa, and Tico have to work as a team to make it through the super adventure race. They have to make it across the Troll's tricky bridge, past the volcano filled with gooey balls, and over the big wall. But the team needs the viewer's help! 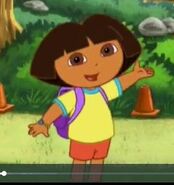 We’re at the super adventure race. We gotta get to the yellow flag way back there on top of the big wall!

Nobody's made it all the way before!

First, we have to go over the Troll Bridge, then go past the volcano!

KA-BOOM! And then we’ll all have to make to the top of that big wall. And that’s how we'll get to the finish line and win the super adventure race!

Now do you see the Troll Bridge?

Boots can swing from tree to tree!

Tico's brave as he can be!

Isa's smart and climbs along!

Backpack's got great things you know.

Dora's help will get us through!

Which vine is number 2?

Now do you see the volcano?

Who on our team has lots of stuff?

That rumble made Backpack bounce up in the tree!

Oh no! Backpack is up in the tree!

Even Map is shocked about what’s going to happen.

"Brave squirrel!", said Swiper when he was impressed about what Tico did. 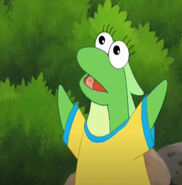 The Fiesta Trio each with an umbrella to protect themselves from the balls of goo.

Do you see the Big Wall?

What was YOUR favorite part of the trip?
Add a photo to this gallery

Retrieved from "https://dora.fandom.com/wiki/We%27re_a_Team!?oldid=101776"
Community content is available under CC-BY-SA unless otherwise noted.