Dora, Boots, and Diego need to take a baby emperor penguin named Penguino home to the south pole. Along the way, they travel by prop plane, expedition boat, and a snowmobile.

Dora and Boots visit Diego who works at the Animal Rescue Center, a place where animals go if they are hurt, sick, or lost. Boots wanted to know if there was any new animals that are lost today. Suddenly, a horn beeps. That means the rescue truck had a lost animal. It was in a small pool filled with ice. It was a penguin named Penguino. They said hello to the penguin and he said "hola". Penguino then got hot and sweaty and is far away from home. Diego checks his field journal, which is ideal to show where each animal lives. They find out that penguins live where it's cold. More specifically, penguins live in the south pole where it's very, very cold. They had to figure out how to get to the south pole to bring Penguino home. They ask Map for help. He says that they have to go across an icy body of water, next they have to go up a big snowy mountain, and that's how they'll get to the south pole. Map also reminds them to try to catch stars along the way. Dora, Boots, Diego, and Penguino got going. They first have to find the icy water. They find it with help from the viewer. They use an airplane to get them there. Since Dora, Boots, and Diego are going to the south pole where it's very cold, they had to dress warm. They put on parkas which is a nice thick and warm coat. They buckled up and off they went. Up, up and away! Diego tells Boots that penguins are birds that don't fly and it was Penguino's first time. Suddenly, they hear stars. There was even an explorer star that looked icy. It was named Helada. Dora wanted to catch her. They each caught a star. Then, they put them in the star pocket. After that, the group reached cold territory. They thanked the airplane for the ride. Now, they just have to find a way across the icy water. They saw a boat, but it was locked up. Penguino found the keys to unlock the padlock securing the boat. Suddenly, they heard Swiper the fox. Swiper swipes the keys and throws them into the icy water. Penguino dived into the icy water to get back the keys. The keys were in an oyster. Penguino dove down deep and got back the keys and swam up to the surface. Now that they got the keys back, they can sail across the icy water. Suddenly, the boat runs into an iceberg. They were stuck. Diego calls out to a blue whale. The group also called out to the blue whale. The blue whale was able to clear the way. They were on the move once again. They made it across the icy water and now they had to get up the snowy mountain. They see a snowmobile built for 4. They put on their helmets and their seatbelts on. They got going but then they saw an array of seals. Dora, Boots, Diego, and Penguino clapped and imitated the seal's sound and the seals moved out of the way. Not long after, they reach the snowy mountain. They thanked the snowmobile for the ride. Boots tried to walk up the snowy mountain but slipped down to the bottom. Luckily, Penguino had a different approach. He started waddling up the mountain. Dora, Boots, and Diego waddled like penguins up the mountain. And together they waddled up to the top. As they were on top of the mountain, it started to break apart. They get separated. Dora and Diego were on one half of the mountain as it lowered with Boots and Penguino on the other half of the mountain raised up. Dora checks her backpack for a rope. Sure enough, Backpack does indeed have one. They find it but it gets stuck in Backpack's background. The viewer pulls the rope free. Dora gets the rope and throws it to Boots. He had to pick up Penguino and using his tail slid down the rescue line. After that, Helada comes out of the star pocket. Helada makes a path for the group to slide down. Helada goes back into the star pocket and the group slide down the path. So far, the group went across the Icy Water and over the snowy mountain, they were getting close to bringing the penguin home. They just have to go to the south pole. They slide down a big snowy hill. Once they made to the south pole, they had to find Penguino's parents. Dora, Boots, and Diego imitate the penguin's sound to call out to them. Immediately after that, they respond and the penguin family was back together.

This episode can be found in Meet Diego! on VHS and DVD, as well as Explore the Earth on DVD.

We have to go across the Icy Water, up the Snowy Mountain, and that’s how we'll get to the South Pole to bring the penguin home!

Try and catch stars along the way!

The icy water is far away!

You can see that Dora, Boots, and Diego passed the icy water. Can you figure where they go next?

¿Donde esta? Where is snowy mountain?

"Snowmobile sure is fast!"

Boots and Penguino safely got down to Dora and Diego!

We went across the icy water, and over snowy mountain, where do we go next?

Do you see the South Pole?

Look at all the penguins!

The book based on this episode. 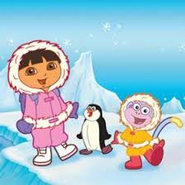 Dora and Boots are waddling like a penguin.
Add a photo to this gallery

Ice Sculptures made in the credits

Retrieved from "https://dora.fandom.com/wiki/To_the_South_Pole?oldid=99807"
Community content is available under CC-BY-SA unless otherwise noted.