Dora and Boots find four things in the wrong seasons and must put them back to their respective season.

Dora & Boots noticed that they are so many things to do in the fall. They did apple picking and jumped in the leaves. But as Dora & Boots jumped in the leaves, a voice said "Ouch!". Dora & Boots saw a Sand Crab. The crab was scared because they landed on her and Dora & Boots apologized and explained that they didn't see the sand crab under the leaves. Sand Crab said it was okay because she has a tough shell. Boots asked Sand Crab what she is doing in the pile of leaves and Sand Crab says she was trying to keep warm. Dora & Boots both go "Uh-oh" and knew that a sand crab doesn't belong in fall. Sand Crab says that she is not used to such chilly wind and rain and is lost. She needs to get home to her family. So Dora & Boots check Map one more time to find out where Sand Crab lives. Map was proud that Dora & Boots brought Mr. Snowman back to winter, Little Flower back to spring, and the pumpkin back to fall. But Sand Crab is lost. The viewer finds the correct season for Sand Crab. She lives where it's hot in summer.

Note: All these items are different outfits for different kinds of adventures, and they're all in big groups for both Dora and Boots.

This episode was on Summer Explorer and Explore the Earth on DVD.

Which Season does the snowman belong in?

Can you find the winter clothes?

A flower in winter? 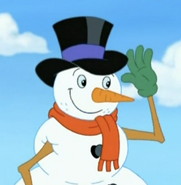 And which path is number 5?

Which flower patch has purple flowers that match Little Flower?

"Thanks for bringing me home!" said Little Flower.

Do you see where it's Fall?

Jack is too big and heavy to carry by hand. Do you see anything they can use to carry him?

Tell Jack what we need to say to stop Swiper. 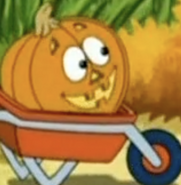 Retrieved from "https://dora.fandom.com/wiki/The_Mixed-Up_Seasons?oldid=98417"
Community content is available under CC-BY-SA unless otherwise noted.