The Grumpy Old Troll Gets Married is the 5th episode of Dora the Explorer from season 6.

Today, the Grumpy Old Troll is getting married to his fiancé Petunia, and Dora and Boots are in the wedding as the flower girl and ring bearer, but they have to recieve the missing wedding rings. 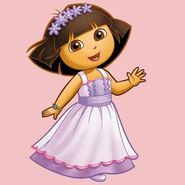 Dora in a flower girl dress

Retrieved from "https://dora.fandom.com/wiki/The_Grumpy_Old_Troll_Gets_Married?oldid=89737"
Community content is available under CC-BY-SA unless otherwise noted.