Start a Wiki
This article is about the episode.  For the location, click here.

The Fix-it Machine (also known as I've Got a Hole in My Boot) is the 10th episode of Dora the Explorer from Season 3.

There are holes everywhere, a hole in Boots' boot, in Tico's tire, in Benny's boat, in the Grumpy Old Troll's purple pants and even in Map's picture map! So Dora takes them all to the Super-Duper Fix-it Machine so that they're as good as new.

Dora was looking for Boots. He gives a hint saying he was hiding in a hole. Dora finds a hole in the ground but there was a rabbit inside that hole. Dora finds another hole in the tree. Boots comes out of hiding and grips the branch with both hands. Dora gasps and saw another hole. The viewer found the hole in Boots' boot. Dora saw Boots' toes sticking out of the hole. Boots comes down to solid ground and freaks out about having a hole in his boot and ran away. Dora catches up to him and calms him down. Boots looks at his reflection in the puddle. Dora saw there was a hole Boots' boot and Boots knew that. Dora decides to take Boots to the super-duper fix-it machine. Dora explains to him that the super-duper fix-it machine fixes anything fast whether something is broken, wrecked, dented, or has a hole in something. Boots got excited and decides he wants to go to the super-duper fix-it machine so he can have his boot be as good as new. The problem was they didn't know how to find the super-duper fix-it machine, so they Dora and Boots ask Map for assistance.

Map accidentally falls into a hole and notices that he has a hole in his map. It's a good thing that Map knows the way to the super-duper fix-it machine. Map explains that they have to go across Crocodile Lake and over the troll bridge to get to the super-duper fix-it machine. He also says they can catch stars along the way too. Dora & Boots got going and had to find Crocodile Lake which was on the path to the right. Dora & Boots see Tico driving his car. Boots shows Tico his red boot. Tico went "Uh-oh. whoo, un hoyo". Boots had a hole or "un hoyo" in Spanish. Dora asked Tico for a ride to the super-duper fix-it machine. Tico was to give them a ride in his car. Dora & Boots climbed in and put on their seatbelts. Tico starts driving slowly but then he picks up speed and started going over the hills on the path. As Tico continued driving, Dora & Boots saw stars in the sky. They even saw Disco the singing and dancing explorer star. Dora & Boots catch the stars and put them into the star pocket. After that, Tico drives over some small rocks and one of the rocks punctures a tire. Tico had to stop his car. The viewer finds another hole in Tico's tire located at the back. Tico climbs out and takes a look at his tire. Boots saw that Tico had "un hoyo" in his tire and understands how he feels because Boots has one in his boot. So, Dora takes Boots to get his boot fixed and Tico to get his tire fixed. Suddenly, they saw a lake. Boots wanted to be sure that it's Crocodile Lake and it was.

Then, they saw Benny in his yellow boat. Benny asked if they would like a ride in his boat. Dora, Boots and Tico were glad to because they had to get across Crocodile Lake to get to the fix-it machine. They climbed in and put on their lifejackets. Benny had paddles for Dora, Boots and Tico; and together they started rowing. As they continued rowing, a tree branch pokes Benny's boat. Dora goes "uh-oh" and thinks she found got another hole. Benny believes there's a hole in his boat and there was. Tico points to the hole in Benny's boat which was losing air. Benny's boat started shrinking and sinking. Benny is in shock and the crocodiles were coming. Benny, Tico, Dora and Boots had to paddle Benny's boat as fast as possible to get away from the crocodiles. After that, they reach the other side of Crocodile Lake. Benny couldn't believe that he has a hole in his boat and really loves it. Tico told him, "No te preocupes, Benny", meaning "Don't worry, Benny". Dora and Boots are going to the super-duper fix-it machine. So far, they have 3 things to fix: Benny's boat, Tico's tire and Boots' boot. Dora, Boots, Benny and Tico approach the troll bridge and saw the troll up ahead.

Mr. Troll was shocked and went, "what is this, a parade?!" Boots asked Mr. Troll if they can over his bridge and he said no. He won't let them go over his bridge until they solve a tricky riddle, and he believes they can't solve it because they have to count real fast. The troll's riddle was "tell me, tell me, tell me, please. How many holes are in this cheese". And they had to hurry up and answer it because a mouse is going to eat up all the cheese. Dora starts counting as fast as she could to figure out how many holes were in the cheese. Dora counts up to 16. After that, the mouse eats up all the cheese. Mr. Troll asked the viewer how many holes were in the cheese. There were 16, but a few seconds later, he went "I can't hear you!". The viewer responds "16" a little louder and Mr. Troll was impressed and tells the viewer that he/she is good at counting. Mouse burps and excuses himself and goes away. Then, Mr. Troll lets Dora, Boots, Benny and Tico over his bridge. They were on their way to the super-duper fix-it machine. Suddenly, Mr. Troll asks if he can come with them to the super duper fix-it machine because there's something wrong with his purple pants. The viewer finds a hole in Mr. Troll's pants. Dora has Mr. Troll tag along with them as they go to the super-duper fix-it machine. Mr. Troll was excited. Now they just have to find the super-duper fix-it machine which was located on the path to the right.

They got going and then Boots stopped because he heard Swiper. The others return and tried to stop Swiper but then Swiper swipes Boots' boot and hides it inside the large hole. Dora asks the viewer if the boot went in the hole and it did. Boots' thought that he'll never get his boot fixed now. Tico tells him not to worry and then Tico gets harnessed up and is going to go down into the large hole to get Boots' boot back. They had to tell Tico "abajo" to go down. The viewer says "abajo" with the group and Tico goes down deep into the hole. A rabbit hops away to reveal Boots' boot. The viewer tells Tico "abajo" and Tico responds back and grabs the boot. Now, Tico has to come up out of the hole. The viewer tells Tico "arriba" for up. Tico responds back and raises himself up and out of the large hole. Boots thanks Tico for getting his boot back and Tico accepts the appreciation.

Not long after that, Dora and her friends have reached to their super-duper fix-it machine. They saw who runs it too which were Roberto the robot and his grandpa. "What can our super duper fix-it machine fix for you today?" asks Roberto's grandpa. "Can you fix my boot?" asks Boots. "Y mi llanta?" asks Tico meaning "and my tire?" "And my boat?" asks Benny. "And my pants?" asks Mr. Troll. Roberto's grandpa says yes and that they have come to the right place. Because "with a sprink and ploink and a rickety pop it'll take anything and fix it right up!". All they had to do is find the correct buttons to press and their stuff was as good as new in no time. First, Mr. Troll puts his pants on the conveyor belt. The troll's pants were purple and the purple button gets pressed. In no time, Mr. Troll's pants has no more hole because it's been fixed. Now, Benny puts his boat on the conveyor belt. Benny's boat was yellow, so the yellow button gets pressed. Sure enough, Benny's boat goes into the Super-Duper Fix-it machine and when it came out on the other side Benny had a look at his boat and told everyone that there's no more hole in his boat because it’s as good as new. Benny thanks Roberto's grandpa. Next, Tico takes his turn by putting his tire on the conveyor belt. Tico's tire was blue, so the blue button gets pressed. Soon after, Tico's wheel goes into the super-duper fix-it machine and as it came out on the other side. Tico was happy that his tire has no more hole and was as good as new. Boots takes his turn and puts his boot onto the conveyor belt. Boots' boot was red, so the red button gets pressed. The super-duper fix-it machine fixes Boots' boot and Boots had a look on where the hole was but the hole was gone. Boots' boot was so red and shiny and was fixed at last. Boots is very excited and thanks Roberto's grandpa for fixing it. So far, Boots' boot, Tico's tire, Benny's boat and Mr. Troll's pants were fixed. Suddenly, Map pops out of Backpack and says that they're not done yet because he has a hole in his map. So Map hops over to the conveyor belt of the super-duper fix-it machine. Map is colored white and the white button gets pressed. Map heads inside the super-duper fix-it machine to get fixed and no time at all, Map's picture map was all fixed up.

Dora reviews on what just got fixed by the super-duper fix-it machine. Mr. Troll's pants were fixed, Benny's boat was fixed, Tico's tire was fixed, Map's picture map was fixed and Boots' boot was fixed. The Fiesta Trio play a fanfare inside a bubble and then it pops at the end of the tune. And then, Disco Star comes out of the star pocket to play some celebration music. 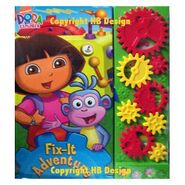 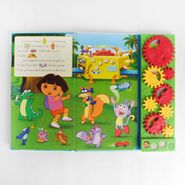 Oh no! Map has a hole in his picture map! 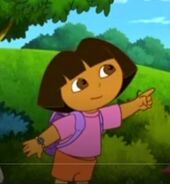 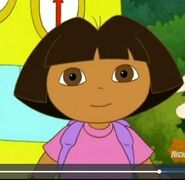 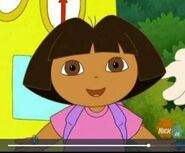 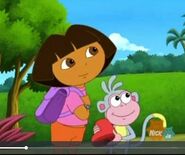 Retrieved from "https://dora.fandom.com/wiki/The_Fix-it_Machine?oldid=74592"
Community content is available under CC-BY-SA unless otherwise noted.