This article is about the episode. If you were looking for the character/location, click here.

Abuela tells Dora and Boots a story about a magical Chocolate Tree that lived near her house a child. Dora and Boots decide to find the chocolate tree to get chocolate (and a special gift) for her.

This episode, along with To the Treehouse, can be found as a bonus episode in Dora's First Trip on DVD. 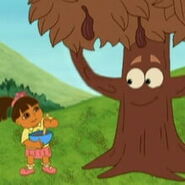 Dora and Boots have to go through the jungle, then past the Bear's cave, and that’s how they’ll get to the Chocolate Tree so they can bring chocolate to Abuela!

Do you see a jungle?

Who's that in the tree?

Necesitan galletas para dar a los animales. "The animals won’t let us go by unless we give them cookies", Dora tells Boots.

Can you find the round, yellow container with a blue star?

I won't let you by unless you give me a cookie!

Do you see the cave?

Sorry! I didn't mean to scare you.

Boots! It’s not the bear, it’s Isa the Iguana!

The bear likes songs and they put him to sleep.

And they put them to sleep. I hope you know a song to sing to that bear!

Inside the Bear's Cave. But where’s the bear?

Do you see the chocolate tree?

Little girl, you remind me of someone, another little girl I used to know a long time ago!

"That’s my Abuela! She's all grown up now." said Dora to Chocolate Tree.

It’s time to make the chocolate!
Add a photo to this gallery

Retrieved from "https://dora.fandom.com/wiki/The_Chocolate_Tree?oldid=99492"
Community content is available under CC-BY-SA unless otherwise noted.