The Big Piñata is the 11th episode of Dora the Explorer from Season 2.

Dora and Boots go to the carnival hoping that they will win the big piñata. But first, they have to collect 10 yellow tickets by playing games and ride the Ferris Wheel and the Merry-Go-Round along the way.

This episode can be found on the VHS and DVD release, It's a Party!

Step right up and try to win the big piñata!

Dora and Boots have to ride the Ferris Wheel, then ride the Merry-Go-Round, and that’s how they'll get to the Big Piñata!

Do you see the Ferris Wheel?

Wow! We’re high up! Do see the merry-go-round?

Boots getting excited for the merry-go-round.

All you have to do is find two shapes that match. If it’s underneath, you'll find a snack!

How did Swiper get in the toy stand?

Do you see the Big Piñata?

Let’s play the ducky game. The object of the game is to listen to the sounds and guess which door the duck is hiding behind!

Where is the duck?

“We have ten yellow tickets!”

Look at all the treats coming out of the big piñata! 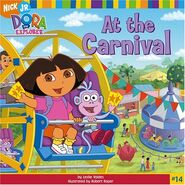 Book based on this episode.
Add a photo to this gallery

Retrieved from "https://dora.fandom.com/wiki/The_Big_Piñata?oldid=95368"
Community content is available under CC-BY-SA unless otherwise noted.