Being stopped from swiping

Benicio Del Toro (Dora and the Lost City of Gold)

Pilot (unaired)
The Legend of the Big Red Chicken (officially)

Dora's Rainforest Reunion
Dora and the Lost City of Gold (film)
Swiper is the main antagonist in the television series and appears in almost every single episode. He is a sneaky yellow fox. As his name implies, Swiper steals or attempts to steal key items that help Dora on her adventures. Clever as he is, Swiper never manages to take Dora completely by surprise; an ominous "whisking" sound is always audible just prior to his appearances.

To prevent Swiper from success, Dora must repeat the phrase, "Swiper, no swiping!" three times. Usually, she prevails, and Swiper slinks away, snapping his fingers and saying, "Oh, man!"; sometimes, however, Swiper gets to the item before Dora has a chance to repeat the phrase. He then gloats, "You're too late!" (and frequently "You'll never find it now!")

Swiper's pelt is primarily an orange burgundy creme, with highlights on his eyebrows, the top of his snout, undercarriage, and the end of his tail. His white eyes and black pupils are concealed behind a blue do-rag/mask, matching his gloves.

Swiper's motive for theft is patently childish; he never seems actually to want the object he takes, since he almost immediately throws it away to hide the item from Dora (prompting her to ask the audience to help her find it). Until recently, it was unclear if he swipes merely for the joy of swiping, or from a desire to annoy and frustrate Dora. Compounding the confusion is the fact that, given the right reason, for example, that the item in question is a present for Dora's puppy, he'll return items he has taken, no matter how much effort he went through to get them. It is also shown that he rarely knows the full importance of what he's taken; for example, he had no idea the aforementioned gift was for Dora's puppy. In the episode "Dora Saves the Mermaids", he revealed that he "liked swiping." He has some kind of New York accent and lives in a burrow on top of Blueberry Hill.

Swiper is very fast and agile, and something of a master of disguise. He seems to have a great deal of technical knowledge, as he's built a variety of vehicles and gadgets (including a remote-controlled robot butterfly) to help him swipe things. Most of the time, however, he simply relies on his natural stalking abilities (sometimes with the aid of a costume, he would always give himself away as his Signature tail connately pops out of the costume) to sneak up on Dora. In the early episodes he often "hid" by curling up into a ball, which neither Dora nor Boots ever recognized as Swiper; he apparently doesn't do this anymore.

He has only been seen once without his mask, when the robot butterfly he built to swipe from Dora and Boots (in the episode "Dora's Got a Puppy") apparently malfunctioned; after they stopped it, it swiped his mask and gloves and kept them from him for a few humorous seconds. (See picture below)

Although his age is not mentioned, he celebrates a birthday in the season 2 episode, "Whose Birthday is It?". He is however possibly in his younger adult years; he has a young voice, appearance, and he has a living grandma. None of Swiper's relatives has ever been seen, but his grandmother has been mentioned in two episodes: "A Letter for Swiper" and "Swiper the Explorer".

Over the course of the series, it's shown that there's more to Swiper's character than an urge to swipe things. In one episode it was revealed that Swiper has a soft spot for puppies, and in another that he likes Cowboy cookies. In a few episodes, he expresses feelings of joy with a fox-like cry of, "Yip-yip-yippee!" In the episode "A Letter For Swiper," Dora filled in for a delivery bird whose glasses were broken; Dora delivered stickers to Swiper (which were sent by his grandmother), and he thanked her for it without trying to swipe anything. In the episode "Swiper the Explorer," Swiper helps Dora on her quest to help Baby Fox find its mommy, and Swiper carries the baby fox almost all through the episode. Also in this episode, it's revealed that Swiper doesn't speak Spanish, and wishes that he did.

The interaction between Dora and the antagonistic fox also reveals the kindness and grace of Dora's character. In one episode, "Dora's Dance to the Rescue", Swiper took pity on a Dancing Elf who was caught in a magic bottle, similar to a genie. The elf tricked the sympathetic Swiper into removing the bottle's cork, thereby releasing the elf and his talking cane. Unfortunately, the wily fox was thereby entrapped in his place. Stuck and desperate, Swiper called out to Dora and Boots. The remainder of the episode chronicled an epic adventure involving most of the land's creatures, eventually ending with the release of Swiper after a dance contest. The episode was atypical as it involved many dances and songs, demonstrated a close, un-conflicted relationship between Swiper and the other creatures, and had Dora refer to the elf in an uncharacteristically judgmental way ("mean Elf").

In this and several other episodes, Swiper finds himself captured, trapped, or in some sort of trouble. Despite his history of mean-spiritedness toward Dora, she demonstrates that the fox is her friend (which he doesn't find out until "Dora's World Adventure") and will always unquestioningly help Swiper just as she would her other friends, Benny, Isa, Boots, and Tico. If Dora needs his help he will come to her aid in the same manner.

In "Dora's Christmas Carol Adventure", another atypical episode, Swiper's love of swiping ends up getting him on Santa's naughty list, when he fails to head Santa's warnings about swiping on Christmas. At first, everyone dismisses what has happened, but Dora immediately insists on helping Swiper. After asking Santa if she can do something, Santa sends Dora and Swiper on an epic quest through time to help Swiper get off the naughty list. Upon coming back, Swiper initially fails his quest, but everyone then expresses that Swiper is their friend and that they want to share their gifts with him because they care about him, despite all the things he's done. It is at this point Swiper learns the true meaning of Christmas, and tries to give Dora his most prized possession, a stuffed bunny he had since he was really young. Dora refuses to accept it but suggests that they can share it, and Swiper shares his bunny with her. Upon seeing him share his bunny, Santa returns and puts Swiper back on the nice list. It is then revealed that Swiper shared his gifts and didn't swipe anything every Christmas after that.

Swiper is far from being unable to feel guilty for his actions. In the episode "A Present For Santa", Swiper returns the present that he swiped, upon discovering that it was for Santa.

In the episode "Dora's World Adventure", Swiper helps Dora return the friendship bracelets he had swiped all over the world, and was shown to feel guilty once he discovered the magnitude of what he'd done and what he had stolen. During this time Swiper gets a taste of his own medicine, so to speak, as each country they visit has its own "Swiper," only of different species, who tries to steal the bracelets: Fifi the skunk in France, Sami the hyena in Tanzania, Fomkah the bear in Russia, and Ying Ying the weasel in China. All of these animals act and dress nearly identically to Swiper and are stopped in the same way he is: by saying their name, followed by "no swiping" three times. Then they run off, saying Swiper's catch phrase, "Ohh, maann" in the local language. Their entrances are also preluded by a sound, only with local music; e.g. Ying Ying has a chau Gong|gong playing.

Swiper was born around the same time as some of the child characters, but Swiper has seemingly aged at a faster rate possibly because of his species difference. Swiper spent a lot of his childhood with his Grandma Fox. As for his stealing, the only known reason he does it is for fun (possibly) but the writers didn't want to give Swiper a detailed backstory on his stealing because they thought the show would be cleaner that way. 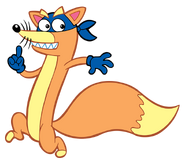 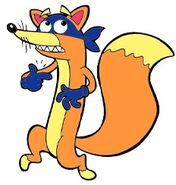 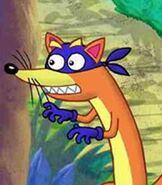 Swiper without his mask and gloves. 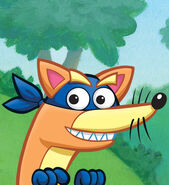 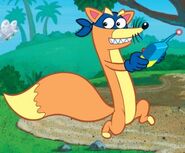 Swiper in the mud.

Toddler Swiper
Add a photo to this gallery

Swiper appears in almost every episode. His first appearance was in "The Legend of the Big Red Chicken". The very first episode that Swiper didn't appear on was "Te Amo".

Retrieved from "https://dora.fandom.com/wiki/Swiper?oldid=62356"
Community content is available under CC-BY-SA unless otherwise noted.