Start a Wiki
Super Spies is the 20th episode of Dora the Explorer from Season 2.

Super Spies Dora and Boots are on a secret mission to stop Swiper from swiping Isa's cupcakes.

Señor Tucán has a secret mission for Dora and Boots.

Wow, look at all those spy gadgets!

How are they going to get through this door?

Because he doesn't have any Spy Glasses 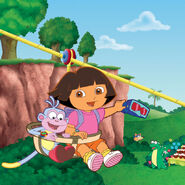 "Oh no! Swiper's going to swipe my cupcakes!"

Book title
Add a photo to this gallery

Retrieved from "https://dora.fandom.com/wiki/Super_Spies?oldid=74235"
Community content is available under CC-BY-SA unless otherwise noted.