Start a Wiki
Stuck Truck is the 3rd episode of Dora the Explorer from Season 3.

Ice Cream Truck is stuck in the ditch near Play Park, so Boots sends out a rescue mission and calls in his truck friends to save the Ice Cream Truck. 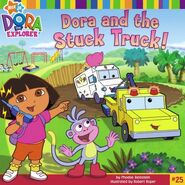 Retrieved from "https://dora.fandom.com/wiki/Stuck_Truck?oldid=74299"
Community content is available under CC-BY-SA unless otherwise noted.