Star Mountain is the 7th episode aired on TV (or the 6th shown episode, due to it being shown on VHS and DVD first) of Dora the Explorer from Season 4.

Dora has a new necklace that matches her bracelet, but when Swiper swipes the necklace and flung all the way it to the Giant Star on top of Star Mountain, Dora and Boots must go all the way up there to retrieve it with help of three Explorer Stars.

The episode starts with Dora showing the viewer her new necklace that she got from her Abuela that matches her bracelet. All of sudden, Dora and Boots hear Swiper nearby. They did not stop him in time, so he swiped the necklace and flung it all the way to the top of the giant star on top of Star Mountain. Boots wonders how they are able to get it back and Dora realized that Star Mountain is where all the explorer stars live. She thought that if they call them by saying "¡Estrellas!", they can help them and they do so. Sure enough, there were three explorer stars that can help: The first one is Tool Star, who has all the tools they want and need. The second one is Saltador, who can give them super jumping power. And finally, there's Glowy, who can either light up something dark or make things warm with her bright light. Now, Dora and Boots have to find out how to get to the top of Star Mountain. They ask Map for assistance. He said that they have to run up 15 star steps, and climb up a big Diamond to get all the way to the Giant Star on top of Star Mountain to retrieve the necklace. Dora and Boots were ready to race to the top of Star Mountain. They will not give up! Along the way to the star steps, there was too much fog and they cannot see where they are going. Luckily, Tool Star has the perfect tool to get rid of the fog. It is a fan. After that, they reach the steps. They have to be careful because there is bubbly green goo, and they do not want to get stuck in the goo. They try counting normally up the steps, but a buzzer sound occurs and they slide down to solid ground. They have to count even faster. They did so and made it up 5 steps. They climb even more steps. So far, they got up 10 steps. Boots was so happy that they were fast. "Oh yeah, Oh yeah, Oh yeah!", he said as he dances and celebrates, but all of sudden, there was goo everywhere. There was so much that they cannot even go up more steps. Glowy comes along and tries melting all the goo. Dora, Boots, and the viewer joined in and sure enough, all the goo is gone. They continue going up the last 5 steps all the way to 15. With that done, they made it up the steps. Along the way to the diamond, it was starting to snow. The problem is Dora and Boots do not have snow clothes. Luckily, the stars have snow clothes to give them. They started to play in the snow, but as Boots was making a snowball, there was a sound of something rolling. It was a giant snowball. Saltador gave them jumping power so they can jump over the giant snowball. In no time, they made it over the snowball and made it to the diamond. To get up the diamond, they have to use star handles and follow a star pattern One star handle is red and the next one is green. The climb up from red, green, red, green, red. They approach two stars, a green one on the right and red on the left. The viewer tells Dora that the next star in the pattern is green. There were more star handles. They kept going. Red, green, red, green, red, green. Again, there was a red star on the left and a green star on the right. The viewer tells them that red comes next. In no time, they made it all the way up the diamond. So far, Dora and Boots made it up the 15 star steps and up the Diamond. They were getting so close to retrieving Dora's necklace. They just have to go to the Giant Star. But along the way, there was a huge blizzard. The explorer stars could not go any further. They got going but Boots slid down and Dora catches him. Soon, they made it to the Giant Star and past the blizzard. Dora and Boots need a rope that is long enough to reach the necklace. They check Backpack for the longest rope. Backpack had two ropes, long and short. The viewer finds the longest one. Dora and Boots twirled the rope like a lasso and threw it up to the top. All of a sudden, they see a snowman on a snowboard trying to get the rope. It is not just any snowman, it was really Swiper. This time, Dora and Boots stopped him but Swiper fell down to the ground and caught his snowboard. Now, Dora can climb up to the top. She needed help from the viewer and in no time, she made it to the top of the Giant Star. Not too long after, Dora is able to reach her necklace successfully. The giant star lit up and the snow melted so the explorer stars can start flying up in the air again. Dora climbs down to the bottom. She and Boots hugged each other. They were so glad that they saved Dora's necklace after it got swiped by Swiper and the explorer stars helped them out for the whole trip.

Explorer Star (in the credits)

Oh no! Swiper threw the necklace all the way to the giant star on top of star mountain! (Note: This is the picture that was used in the Coming Up Next for Noggin (and Nick Jr. only when Moose A. Moose says, "Moose here! Dora the explorer is coming up next! But first it's...")).

Saltador can help us jump!

Look, we’re almost to the top of Star Mountain! All we have to do is reach the Giant Star! 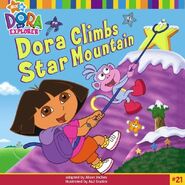 The book based off this episode

This one appeared in one of the promos for the premiere of this episode.

Retrieved from "https://dora.fandom.com/wiki/Star_Mountain?oldid=74869"
Community content is available under CC-BY-SA unless otherwise noted.