School Pet is the 23rd episode of Dora the Explorer from Season 2.

Today, Boots is visiting Dora's school classroom, when they noticed their class' pet hamster named Mimo is missing from his cage! It is up to Dora and Boots to rescue him! They'll have to find nine missing boards to cross the Rope Bridge, and climb, swing, and slide their way through the Jungle to reach Mimo at the Pyramids and bring him home safe and sound.

Dora and Boots are at school. Today, Dora is going to give Boots a tour of her classroom. They go inside and meet with Maestra Beatriz. Then they walk to the cubby hallway. There was Backpack hanging on the hook in Dora's cubby. She gets strapped on to Dora. Next, Dora and Boots see pictures that they drew of the the class pet hamster named Mimo, They show a picture of Mimo the school pet's hamster who loves eating carrots, a picture of him sliding down, and a picture a Dora with Mimo. After that, Dora and Boots want to see Mimo in person, so they go to Mimo's cage. Dora explains to the viewer that every day at school, the class gives him fresh water and food. Boots thought they should give a carrot to him because carrots are his favorite snack. Suddenly, as Dora and Boots tried to give him the carrot, they noticed that Mimo wasn't in his cage because the cage door was opened. They looked all around the classroom; high and low. Then, they noticed the window was opened and thought Mimo not only escaped from his cage, but out of the school's classroom! They went out and called to him. Benny, Isa, and Tico asked Dora and Boots what the problem is and Boots explained to them that Mimo is missing from his cage. They were shocked and looked for Mimo in the school playground, calling for him as loud as they could. But he wasn't there. Soon after, Dora and Boots asked Map if he's seen Mimo the hamster. Sure enough, he knows exactly where Mimo is! He tells Dora and Boots that Mimo ran all the way to the pyramids. But before they can get there, they had to go across the rope bridge and through a jungle. Dora and Boots got going to search for Mimo the hamster. They get to the rope bridge but Swiper swipes the boards and tosses them into the water. They counted 9 boards in the water. They looked all around for the boards. Once Dora and Boots located the 9 boards, they counted as they got put back on the rope bridge. With that done, Dora and Boots crossed the rope bridge safely. Later on, Boots takes a slide down into a slippery sand slide. Boots couldn't get back up to Dora because the sand was too slippery. So, Dora gets out a rope out of Backpack and tosses it down to Boots. Dora pulls Boots out of the sand slide. And together, they stayed on the path until they reached the jungle. Dora and Boots saw snakes, crocodiles, and spiders. They climbed up a red ladder, swung on a blue swing, and slid down the red slide (they couldn’t take the blue ladder, the red swing, nor the blue slide because the blue ladder is broken and has spiders, the red swing has a snake and is broken, and the blue slide has a hole in it). After that, they were getting close to the pyramids to rescue Mimo the hamster. They start running to the pyramids. Boots asked Dora if she still has the carrot for Mimo and she does. But then, they heard Swiper the fox. This time, they stopped Swiper from swiping Mimo's carrot. After that, they reach the pyramids. Mimo was inside one of the pyramids. One pyramid had a lightning bolt on top, the second one had a star on top, and the third one pyramid had a rainbow on top. They listened carefully to each one. The sheep was behind the lightning bolt pyramid and the horse was behind the rainbow pyramid which meant that Mimo was in the star pyramid. Dora and Boots went up to the top of the star pyramid. Mimo was stuck at the bottom. Dora and Boots had to help Mimo get to the top of the pyramid and out the door. Mimo had to choose between 2 paths for each level and he had to be careful because there are spiders in there. Mimo knows Spanish so they have to say "largo" or "corto" to tell him which path to take. Mimo takes the long path first, then the short path, and takes another long path to exit the pyramid. Immediately after that, Mimo makes it all the way up to the top of the pyramid and is out the door to find Dora and Boots waiting for him. Boots gives Mimo a carrot and he starts nibbling it. Now it is time to take Mimo back to the school. They went down the steps of the pyramid and they went back the way they came offscreen. At the school, Benny, Isa, and Tico feel sad until Dora and Boots arrive back with Mimo and said they found him. Everyone was happy. Mimo was back in his cage. He munched on the carrot and spun on his wheel. Dora's teacher was also pleased to have Mimo back home in his cage. She not only thanked Dora and Boots, but also thanked the viewer at home for saving Mimo the hamster and bringing him back home to his hamster cage.

This episode can be found on the DVD release, Dora's Christmas!. It can also be found in Nickelodeon: All About Fall! on DVD.

Aw, what a cute picture!

Dora and Boots have to go across the Rope Bridge, then through the Jungle, and that’s how they'll to get to the Pyramids to rescue Mimo!

Do you see the Rope Bridge? (Is it on the first or second path?)

Do you see a jungle?

Which ladder is safe to climb, red or blue?

Now which swing should Dora and Boots use, blue or red?

Good thing they used the blue swing because the red one had a snake in it! They are almost through the jungle.

Now they have to slide down to exit the jungle. Which slide is safe for them to take, blue or red?

Do you see the pyramids? 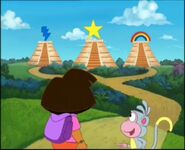 There are 3 pyramids. Which one do you think Mimo is inside?

Come on, Boots! We have to take Mimo home!

We couldn’t have saved Mimo without you!

What was YOUR favorite part of the trip?
Add a photo to this gallery

Retrieved from "https://dora.fandom.com/wiki/School_Pet?oldid=98285"
Community content is available under CC-BY-SA unless otherwise noted.