Sammy is a teenage girl with bronze skin, curly dark hair, thick eyebrows and big dark eyes. She most notably wears a gray cardigan over a yellow blouse.

At the beginning of the film, she’s described as rude, snobby and an overachiever. She's a perfectionist and takes her studies very seriously. When partnered with Dora, Diego and Randy she acted harshly to them. She then began to appreciate them and become their friends. She’s also the love interest of Diego.

The Lost City of Gold

In Dora and the Lost City of Gold Sammy finds herself unravelling a bit in the jungle. Her uptight behavior doesn’t suit well for the wild jungles of Peru and she learns to adapt. 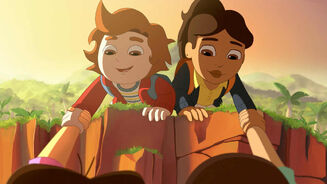 DORA AND THE LOST CITY OF GOLD Madeleine Madden "Sammy" On-set Interview
Add a photo to this gallery
Retrieved from "https://dora.fandom.com/wiki/Sammy_(Dora_and_the_Lost_City_of_Gold)?oldid=66670"
Community content is available under CC-BY-SA unless otherwise noted.