Start a Wiki
Rhea is an Animal Rescuer is the 5th episode of Go, Diego, Go! from season 3.

Diego rescues a rhea that's stuck in the grass, and can't fly.

While Diego practices his Super Catch, a rhea calls for help because multiple cuckoo birds are bullying him for his inability to fly. Diego invites Rhea to be an Animal Rescuer for the day and together they set off to rescue a nest of baby cuckoo birds. Along the way, Rhea protects some Rhea eggs from the Pumas then tip-toes up the Slippery Rocks, and they finally makes it just in time to catch the baby cuckoo birds as they fall from their nest. 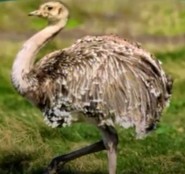 Retrieved from "https://dora.fandom.com/wiki/Rhea_is_an_Animal_Rescuer?oldid=60203"
Community content is available under CC-BY-SA unless otherwise noted.