Pinto, the Pony Express is the 10th episode of Dora the Explorer from season 2.

Dora & Boots are asked to bring some cowboy cookies to Benny the Bull.

Dora is dressed as a cowgirl and Boots is dressed as a cowboy and together, they ride on Pinto the Pony. Val the Octopus told Cowgirl Dora & Cowboy Boots that they were asked to make a special delivery. Val the Octopus had a sack filled with cowboy cookies. Val warned the cowpokes that Swiper really loves cowboy cookies and will be after them for the whole trip. Dora & Boots were up to the challenge and wanted to make sure that they can deliver the cowboy cookies to Benny. The cowpokes headed off and then they didn't know where to find Benny. So, they asked Map for assistance. Map said that Benny is at his barn. But before they can get there, Map says that they had to go through the gold tunnel, past rattlesnake rocks and then they'll get to Benny's barn and deliver the cowboy cookies to Benny the bull. Dora & Boots rode Pinto the pony through the range. But as they were on their way to the gold tunnel, they saw a cactus that moves. Dora and Boots realized that someone was in the cactus. It was Swiper the fox. They stop Swiper and said to himself as he was running away that he really wanted those cookies. Dora and Boots reached the gold tunnel and saw Isa the iguana. They told Isa that they had to go through the gold tunnel. Isa told Dora & Boots that it was dark in the tunnel. Dora searches in her backpack for something they can see in the dark. Backpack had a lantern and that is Cowgirl Dora & Cowboy Boots used to get through the gold tunnel. Isa told them that they had to follow the 7 gold stones. Dora & Boots entered the gold tunnel and counted the 7 gold stones. After that, a giant rock moves over and the cowpokes made it through the gold tunnel. Dora puts away the lantern in her backpack. The fiesta trio played a fanfare as the cowpokes completed the 1st task. Boots' cowboy hat gets away but he catches it with his tail and puts his hat back on his head. Dora & Boots climbed back onto Pinto the pony and started making their way to the 2nd place which was Rattlesnake Rocks. Dora & Boots had to watch out for Swiper. Dora & Boots stopped Swiper again. Dora & Boots rode Pinto the pony and then Boots saw a cliff up ahead. Pinto skids to a stop and the sack of cowboy cookies fly away. Dora uses her lasso to catch the cookies. Dora twirls the lasso and threw the lasso around the sack. Dora pulls the sack back up and then they put it back into the saddle pocket. Dora & Boots got going again with Pinto the pony. Suddenly, they approached Rattlesnake Rocks. Pinto slowed down and the cowpokes had to be careful not to step on any rattlesnakes. Dora & Boots told the rattlesnakes "para" so the rattlesnakes can stop. They pass through 5 rattlesnakes. After that, Cowgirl Dora urged Pinto to giddy-up and then Cowgirl Dora & Cowboy Boots finish going through Rattlesnake Rocks. Dora & Boots lifted their western hats and Pinto gallops along to Benny's barn. Then, the cowpokes climbed off Pinto and started looking for Benny the bull. Benny was playing his harmonica. Benny goes outside and then Dora and Boots told Benny that they rode Pinto the pony to give Benny a special delivery. Benny was excited and it was cowboy cookies. Benny thanks Dora, Boots and Pinto. Suddenly, Swiper was nearby again. Dora, Boots and Benny stopped Swiper once more and he ran again. Benny decided to share his cowboy cookies with his friends. Dora got one shaped like a star. Boots got one shaped like a cowboy boot. Pinto got one shaped like a horseshoe and Benny got one shaped like a cowboy hat. They each took a few bites of their cowboy cookies. Benny realized there was one cowboy cookie left. It was shaped like a cactus. Benny decided to give the last cowboy cookie to Swiper the fox. Dora, Boots and Benny call out to Swiper. Swiper comes out of hiding behind a cactus. Benny gives the cowboy cookie to Swiper. Swiper ate it and he felt happy. And that was how Dora & Boots rode on the range and delivered the cowboy cookies to Benny. 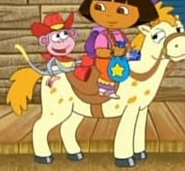 Do you see Swiper behind the tumbleweed?

Retrieved from "https://dora.fandom.com/wiki/Pinto,_the_Pony_Express?oldid=44766"
Community content is available under CC-BY-SA unless otherwise noted.