La Maestra de Música (translated to English as The Music Teacher) is the 4th episode (3rd in earlier airings) of Dora the Explorer from Season 4.

Dora and Boots need to help their music teacher find a way to get to school after the chain on her bicycle is broken.

Dora and Boots were walking to school. They each had their own backpacks. Boots mentions to the viewer that what he likes about school is that his music teacher always sings a special song called the "Hola, Hola" song and that is his favorite school song Suddenly, Boots heard his music teacher singing the "Hola, Hola" song. She was riding a bicycle and had a basket of musical instruments. Her name was Maestra. She plays her guitar. Dora introduces herself to Boots' music teacher. Boots tells Maestra that she was singing his most favorite school song ever. She said she loves that song too. Dora and Boots decided to sing the "Hola, Hola" song with Maestra for fun and they invite the viewer to sing with them too. After the song, Maestra had to get going to school. Suddenly, her bicycle chain broke. Now, Maestra had to find a different way to get to school before the children get there. She doesn’t have a map, but Dora tells Maestra that she has a map, who is her friend, and he always know the best way to go. They check the Map for directions and he tells them that they had to go through the town and over the Musical Mountain to get to the school. Maestra, Dora, and Boots had to find the town. Maestra climbs up the tree to have a better look. The viewer finds the town and then Maestra climbs back down and then they hear the third bell, which means they have to hurry. They can’t walk through the town because it would take too long, so they have to figure out a form of transportation to get them through the town fast. A purple bus named Autobús drives along. Autobús stops and then Dora, Boots, and Maestra started boarding the bus. Maestra drops some musical instruments. She didn't have a Backpack but Dora tells her she has one, so Maestra puts the musical instruments into Dora's Backpack. Now, they all started to board the bus. Autobús starts driving through the town. They sing the song "Wheels on the Bus" but, since Autobús speaks Spanish, they replace the word "wheels" with the Spanish word "llantas" and "horn" with the word "bocina". After riding through the town, Dora, Boots, and Maestra got off the bus and thanked Autobús for the ride through the town. Next, they had to go up Musical Mountain. They figured out that Musical Mountain plays a scale. Dora, Boots, and Maestra saw Azul. He was putting himself together. They help Azul put his train cars together starting from biggest all the way down to the smallest. Maestra, Dora, and Boots board the train and then they counted from 1-8 as they go up the mountain by singing the scale. Then they counted from 8-1 as they went down the mountain by singing the scale in reverse. Azul went fast but had to slow down because a train was coming down another track. Azul went fast again and dropped off Dora, Boots, and Maestra at the end of the track. They hear the last school bell, which means that Maestra, Dora, and Boots have to hurry. Luckily, they were getting close to the school. The school bus drives past and they still had to get to the school before the students arrive. Diego come by and decides that they can zip through the forest using the zip cord. Dora, Boots, Diego, and Maestra zipped through the forest and saw snakes and bees. They sang to the tune of "Wheels on the Bus" and used the Spanish words "culebras" for "snakes" and "abejas" for "bees" but instead of singing "all through the town", they sang "all through the forest". After that, they approached the school. As soon as they got close to the building, Swiper was nearby. Diego thought he'll try to swipe La Maestra's guitarra. They all stop Swiper by saying "Swiper no swiping". Swiper sings "Oh" seven times, then finally sings "Oh man!", then runs away. Dora, Boots, Diego, and Maestra enter the school music classroom and had to get the school setup. Boots was in shock because he thought they lost the instruments. The viewer tells that Dora put Maestra's musical instruments in Backpack. They get them out and then the students started entering the school. Dora, Boots, Diego, and Maestra sang the "Hola, Hola" song as the students came in. Everyone got an instrument as they were singing and they all played music together.

Rides in this episode

This episode premiered on VHS and DVD titled "Musical School Days" and "Nickelodeon Favorites: Dance to the Music" on DVD.

Will you sing the Hola, Hola song with us?

Uh oh! This can NOT be good!

Will you check the Map for the quickest way to school? You have to say "Map!"

Dora, Boots, and La Maestra have to get to school in a hurry!

First we go through the town, then we go over Musical Mountain!

Each time a note plays, a dotted line forms. The notes can be heard in the key of G-major.

And that’s how they’ll get to the school (la escuela)! So remember: Town, Mountain, School!

Now do you see the town?

Autobús can take Dora, Boots, and Maestra through the town!

I know a song that can help Autobús go rápido through the town. The Wheels on the Bus song!

Yay! Dora and Boots made it through the town!

We went through the town, check! Where do we go next?

There are three mountains!

Listen closely to find out which mountain is Musical Mountain.

Which mountain is Musical Mountain?

The second one, right!

Who can take us up the mountain fast?

"Sure, I can take you up the mountain! But first, I need your help to sort my train cars from biggest to smallest!"

Which car is the biggest?

Now which one is the biggest car?

Now which car is the biggest?

Now which one's the biggest car?

Now where is the smallest car?

You did it! Now Azul is ready to go!

Count and sing with us! (Note: Notice any errors on Dora's backpack?)

We made it to the top of the mountain! All right!

Oh no! Here comes another train!

Dora, Boots, and La Maestra need Azul to slow down! If not, he will bump into the other train!

We made it through the town, check! Over Musical Mountain, check! So where do we go next?

Do you see the school?

We've got to get to the school before the children!

Grab on to the zip cord, and we’ll get to school Rapido!

All through the forest!

We made it past the snakes! Great singing!

We have to warn the bees that we are coming! Let’s sing again!

Las abejas in the trees go "buzz-buzz-buzz", all through the forest!

Yay! We made it to the school!

We better run inside!

Wait a minute! Do you hear something?!

Do you see him?

Where are the instruments?

The children are arriving!

I hear the students!

Are you ready to sing the "Hola, Hola" song?

What a great day for school you know! 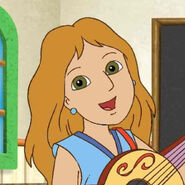 VHS and DVD release.
Add a photo to this gallery

Retrieved from "https://dora.fandom.com/wiki/La_Maestra_de_Música?oldid=99823"
Community content is available under CC-BY-SA unless otherwise noted.