Kate was a minor character who was dressed as a knight in Dora Saves the Crystal Kingdom. She is also an Explorer Girl.

Kate has red hair, blue eyes, and cream colored skin. She is also very pretty. Kate is seen in a sky blue blouse with purple edging, a periwinkle undershirt, purple capris, and lavender and white shoes.

In Our First Concert, she wore a blue jean jacket with a teal collar and cuffs, red badge, her periwinkle undershirt, a necklace with red and green beads, the bracelets from Explorer Girls, a blue and periwinkle striped skirt, purple leggings, and pink boots. 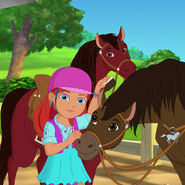 Add a photo to this gallery
Retrieved from "https://dora.fandom.com/wiki/Kate?oldid=47464"
Community content is available under CC-BY-SA unless otherwise noted.