This article is about the character. If you were look for his song with the same name, click here.

Return to the Rainforest
The Grumpy Old Troll (sometimes known as Mr. Troll) is the former secondary antagonist, later anti-hero of Dora the Explorer, a troll who lives under the Troll Bridge that Dora and Boots sometimes come across. Whenever they try to cross his bridge, he will jump out and sing a song telling them that they need to answer a riddle (or other challenge) or else they will not be allowed across. But never cause trouble together.

He is formerly almost always grumpy, He acts as a father figure to other characters. enjoys making up riddles for visitors who try to cross his bridge. However, he is shown to be happy at times and does have a few hobbies.

The Grumpy Old Troll is mostly yellow. He has a long orange beard and an orange mustache. He has white eyes with black pupils. He does not wear any clothing at all, although he had a barrel around his waist in The Fix-it Machine. 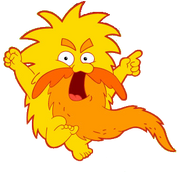 "He's going to try to swipe 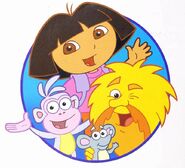