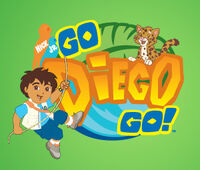 Go, Diego, Go! is a children's television series created by Chris Gifford and Valerie Walsh, and is a spin-off of Dora the Explorer. The show premiered on September 6, 2005, on Nickelodeon. It also aired as part of the Nick Jr. on CBS block from September 17, 2005, to September 9, 2006. On December 20, 2006, Nick Jr. announced that it had ordered twenty new episodes that were in production. Since April 2008, the show has been dubbed into Spanish and airs in the United States on Univision as part of their Planeta U block. The series was finished in 2011. In a Dora and Friends Into The City episode, "For the Birds", Diego and Jaguar are featured in the episode and have grown since the end of Go Diego Go!.

The show features an 8-year-old boy, Diego Márquez (voiced by Jake T. Austin Seasons 1-3; Matt Hunter Seasons 4-5), who helps animals in danger, mainly in the rainforest. His cousin is Dora from Dora the Explorer, as revealed in multiple shows. Diego was first introduced in an episode of Dora the Explorer titled Meet Diego! (originally voiced by brothers Andres and Felipe Dieppa). Diego has a jaguar companion named Baby Jaguar who assists him on adventures. Thomas Sharkey, who is the voice of Chris Hansen, is also the singing voice of the kangaroo "Austin" in the Backyardigans. Baby Jaguar also appears in Dora the Explorer but inconsistently; on Go, Diego, Go! he takes a more active role, which includes being able to speak. It's unknown whether Diego's parents let him keep Baby Jaguar as a pet or Baby Jaguar adopted Diego. Diego's grandfather has a strawberry farm, and he made his first appearance in "Green Iguana Helps Abuelito Plant a New Farm!" It was unknown whether he was Diego's maternal grandfather or paternal grandfather. Diego is also very ticklish, which is revealed in "Diego Saves Baby River Dolphin." Diego is Dora's older cousin; Dora makes several cameos in the series, usually without Boots. Diego's big sister, Alicia (voiced by child actress Serena Kerrigan), is a computer whiz and also bilingual; she directs the animal rescue calls that come into the center. She also assists Diego in helping the animals they love. Alicia is responsible and kind-hearted and always kind to her little brother. Though she is described as 11 years old, she is often seen performing tasks (most obviously driving a motor vehicle) that could only be done by a person several years older. Diego's parents are described as animal scientists; they appear in several episodes, but their names are yet to be given. Dora's dad and Diego's dad are brothers. There is also one other big sister, Daisy (which makes Alicia a middle child), who only appears in "The Bobo's Mother's Day!" with Diego stating that she is visiting from college. Daisy appears in three "Dora the Explorer" episodes: "Daisy, La Quinceañera", "Dora Saves the Game" and as a cameo in "Dora's Pirate Adventure." This makes Diego the youngest child. In most episodes, Diego hears an animal's cry for help at his rainforest Animal Rescue Center. With help from his friends, gadgets, and viewers at home, he sets out to rescue the animal. Other characters include Click (voiced by Rosie Perez), a camera that locates the animal calling for help; Rescue Pack, a messenger bag Diego wears that can transform into any object and the Bobo Brothers, two troublesome spider monkeys. They can be stopped by shouting "Freeze, Bobos!" and Diego often encourages viewers to help him stop them by shouting it. While they might be compared to Swiper from Dora, they don't cause trouble for Diego on purpose and apologize after doing so. There are a few recurring animal friends that are normally rescued by Diego in their first appearance but appear later to return the favor and help Diego out. The most common of these is Linda the Llama, who has appeared prominently in four episodes and made a cameo appearance in "Three Little Condors." In the episode, "Egyptian Camel Adventure" actor Adam Alexi-Malle voices the character "Jamal the Camel". Just like Dora the Explorer, the show teaches preschool-age children the Spanish language. However, the show takes a lesser approach to this and focuses more on the teaching of various animals. Diego is featured in a one-hour episode titled "The Great Dinosaur Rescue" where he, Alicia, Dora, and Baby Jaguar go back in time to save a dinosaur; Nick Jr. has yet to show this episode. However, it was featured on Nick Jr. Australia in August 2007 and has had several re-runs as half-hour segments. Two additional one-hour episodes are in production. Diego also will be starring in a live show called "The Great Jaguar Rescue" where he must save Baby Jaguar. This is also the premise of an episode of the show that aired on January 15, 2007, and was released on DVD on January 16, 2007. The live version of Go, Diego, Go premiered in January 2007 starring Richard J. Portela in the role of Diego. Kelly Ripa, and her son, Michael Consuelos both guest star as Mommy Maned Wolf and her Pup. In each episode of Go, Diego, Go! there are several songs and uses of Spanish vocabulary. Whenever a carnivorous predator (anacondas) is featured on the show, its diet is not mentioned, unlike when herbivores are shown (such as marmosets). Two notable exceptions to this is when an octopus helping Diego is explicitly shown and discussed eating live crabs (the crabs, however, are not anthropomorphised in the same way that other creatures typically are in the series) and when a baby river dolphin who had tickled Diego in "Diego Saves Baby River Dolphin" eats the crabs heading toward a waterfall. Whenever a featured animal is threatened by a predator, the prey is described as being "afraid" of the predator.

Retrieved from "https://dora.fandom.com/wiki/Go,_Diego,_Go!?oldid=48711"
Community content is available under CC-BY-SA unless otherwise noted.