The Giant-Giant is a giant that first appears in the season 3 episode What Happens Next?. He also appears in the season 4 episode Dora's Fairytale Adventure and the season 5 episode Super Babies' Dream Adventure. In Dora's Hair-Raising Adventure, there is a female giant with the same skin, tone and personality as him, which could possibly mean that they could be related with one another. 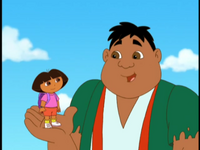 Retrieved from "https://dora.fandom.com/wiki/Giant?oldid=68284"
Community content is available under CC-BY-SA unless otherwise noted.