Start a Wiki
First Day of School is the 1st episode of Dora the Explorer from Season 5.

Boots and Tico are looking forward to their first day of school, where they'll learn in both English and Spanish. Dora leads them to school, but along the way, Swiper steals their lunches. 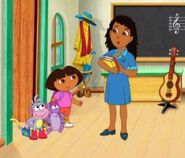 Retrieved from "https://dora.fandom.com/wiki/First_Day_of_School?oldid=74585"
Community content is available under CC-BY-SA unless otherwise noted.