Dora and the Lost City of Gold is a Dora the Explorer movie. The movie was released on August 9, 2019, by Paramount Pictures and Nickelodeon Movies. The story centers around Dora as a teenager who moves to the city to live with her cousin Diego Márquez.[1]

Dora the Explorer finds Dora dealing with high school and leading a new group of friends on an adventure with her sidekick, Boots the monkey, and famed cousin Diego.[2]

Young Dora spends her days in the Peruvian jungle with her cousin Diego, monkey Boots and imaginary friends Backpack and Map while warding off fox thief Swiper. When they're six years old, Diego leaves with his family to live in Los Angeles, even as Dora remains with her explorer parents, Elena and Cole, who are looking for the Inca city Parapata, the Lost City of Gold.

Ten years later, concerned for her safety, Dora is sent to live with Diego's family after her parents decipher a vital clue to Parapata's location. Dora, whose quirky habits of turning to address a non-existent audience and interacting with her imaginary friends, is no longer considered so charming at her current age. And she has a hard time fitting in with her new peers and reconnecting with Diego. Nonetheless, Dora continues to act with her usual positivity and enthusiasm despite Diego's embarrassment, interacting with fellow students Sammy and Randy. In the meantime, Dora has been hearing less and less from her parents and assumes they've just become distracted in their search for Parapata.

During a school field trip to a museum, Dora and the others are kidnapped to Peru by a band of mercenaries. Thankfully, a friend of Dora's parents, Alejandro, helps them escape. But, in the chaos Swiper steals Dora's map. Alejandro reports that Dora's parents have gone missing and mercenaries are hunting for them and planning to take Parapata's riches for themselves. Dora resolves to find them first, and everyone else trundles along hoping for rescue.

The jungle is Dora's element and recalibrates her intrepid spirit while revitalizing Diego in unexpected ways. They travel through the jungle and meet and beat various puzzles and obstacles until eventually, they meet Dora's parents right outside Parapata. Unfortunately, Alejandro was no friend of theirs and is in fact, one of the mercenaries.

They're all captured, but with Boots' help, the teenagers escape. Unfortunately, the same can't be said of Elena and Cole and the teenagers decide they'll have to get into Parapata and use the treasure as a bargaining chip. Inside the city are further dangerous traps, and while they make it through mostly unscathed and reach the central temple, they were unaware Alejandro had been following them.

Greedily, Alejandro attempts to take the city shrine's idol for himself and ends up falling into a trap instead. Parapata's guards are still alive and well, led by their queen, they capture the invading mercenaries. When they go to confront the teenagers, Dora speaks to them in Quechua, and assures the natives they'd only come for her parents and to learn about the city. Peaceably, the Inca lets them leave after getting a glimpse of their greatest treasure.

Back at their home in the jungle, Elena and Cole talk about going on a brand new expedition with the whole family. But, Dora decides to stay with her new friends and renewed relationship with Diego and decides to return to school (at least for now, however).

On October 24, 2017, a deal was struck for a live-action version of the television series to be made, with James Bobin directing. Nicholas Stoller and Danielle Sanchez-Witzel were hired to pen a script. Michael Bay's Platinum Dunes was announced as producer, though Bay and the company were ultimately not involved.

The film depicts a teenage version of Dora. It was issued an initial release date of August 2, 2019. In May 2018, Isabela Moner was cast to play Dora. Eugenio Derbez began negotiations to join in June, and was confirmed to appear in July. Micke Moreno was cast to play Diego, though had to withdraw and was replaced by Jeff Wahlberg. Eva Longoria and Michael Peña were cast as Dora's parents that August. Madeleine Maddenalso joined the cast of the film. In October, Q'orianka Kilcher was added to the cast,and in November, Pia Miller was set to play Dora's aunt Sabrina. In December 2018, Benicio del Toro joined as the voice of Swiper, and in March 2019, Danny Trejoannounced that he had been cast as the voice of Boots the Monkey.

In an interview with Forbes, Moner stated that she learned Quechua language for the character. She said that the film would "take audiences to Machu Picchu" to "explore the Incan culture," and commented that "Dora is very cultured and she knows everything about everything," and that she "doesn't have a defined ethnicity."

Dora and the Lost City of Gold was released on Digital HD on November 5, 2019, and later on DVD and Blu-ray on November 19, 2019. The film is also available on Amazon Prime and Paramount+. 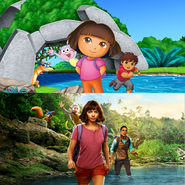 Dora in her animated sequence 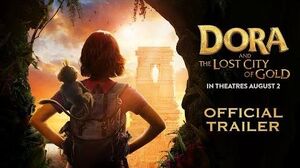 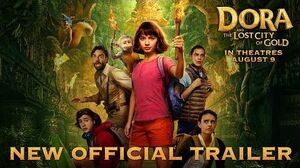 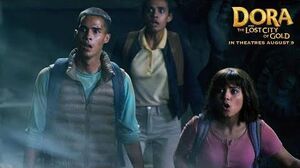 11 Things You NEED To Know About Dora and the Lost City of Gold!! Nick

Dora and the Lost City of Gold/Transcript