Dora Saves the Mermaids! is a Dora the Explorer TV special. It is also the 25th episode from Season 4, as well as the Season 4 finale.

Dora and Boots must return a magic crown back to a mermaid named Mariana in the Mermaid Kingdom. However, they also have to get past a mean octopus who dumps garbage all over the kingdom.

The episode starts with Dora and Boots at the beach. They were cleaning up the beach because it is Clean Up the Beach Day, where they have make sure the beach is clean by picking up any trash found on the ground. They were looking for garbage on the sand and took a juice box off a crab's head. After looking for garbage, a very special talking clam shell told Dora and Boots about Mermaid Kingdom. He told them a story about a young mermaid named Mariana, but she and her friends were in trouble because a mean octopus dumped garbage all over the Mermaid Kingdom and there is a chance it will disappear. The clam suggests that Dora and Boots should help them. But first, they must hear the whole story so they can fully understand what is going on. He told them that Mariana discovered a magic crown put it on, made a wish and all the garbage disappeared and the kingdom sparkled. But, one day a giant wave swept the crown away and Mariana needed Dora and Boots' help because the octopus was back and the garbage was making the mermaids and mermen sad and sick. Mariana tells Dora and Boots that their Mermaid Kingdom is disappearing under all the dirty garbage and she needs their help.

Dora and Boots found the magic crown on the sand and Dora picked it up. Now they have to check the Map to find the way to the Mermaid Kingdom. He says that they had to go over Sea Shell Bridge, across Pirate Island, and past the Silly Sea to get there. Once they arrived at the Sea Shell Bridge, they saw that the sea shells had numbers on them Boots stepped on a sea shell with the number 5 on it and moved away from it before it fell into the water. The Sea Shell Bridge said they had to follow the shells from 1 to 6 but then the mean octopus arrived and saw that Dora and Boots had found the magic crown but he made sure those two would never get to the mermaid kingdom so he dumps dirt on the bridge so they can't see the numbers.

This episode can be found on the DVD with the same name.

"You must find the magic crown

and bring it to Mariana!" said the clam.

Do you see the the magic crown?

We have to go over Sea Shell Bridge, across Pirate Island, past the Silly Sea, and that’s how we'll get to the Mermaid Kingdom!

Do you see Seashell Bridge?

You found the Magic Crown!

But, I'll make sure you’ll NEVER make it to the Mermaid Kingdom!

The bridge is covered in dirt.

There's so much dirt, we can't see the numbers!

What can we use to clear the bridge?

The bridge is clean!

Do you see the number one?

What number comes after five?

You can see that Dora and Boots made it across Sea Shell Bridge. Can you figure out where they need to go next?

Pirate Island has a flag.

Which one is Pirate Island?

that rock is following us!" said Boots.

Who’s inside that rock costume?!

"The garbage is making the mermaids sick...

but I really, REALLY

You better bring the crown back to the mermaids..

The octopus put garbage on the whale!

Oh no, the whale can’t see where she’s going because there’s garbage on her eye!

Oh, I can't see anything with all this garbage.

We can help you, whale.

to swipe the garbage from the whale.

Who's good at swiping?

Will you do the Coconut Conga with us?

Do you see the Silly Sea?

Oh no! The sail is missing!

Do you see the dolphins?

A Chicken fish?! Wow! That silly sea IS INDEED silly!

Do you see the Mermaid Kingdom?

Thanks for helping me through the garbage

Dora is now a mermaid!

Dora with a trash bag

Look! The silly sea creatures are here to help clean up, too!

the octopus is on the pile

And we told Swiper to swipe!

This image is from one of the promos for the premiere of this episode. 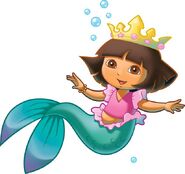 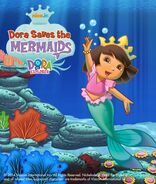 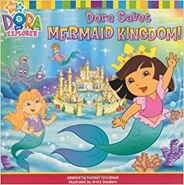 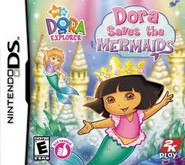