Dora's Museum Sleepover Adventure is the 13th episode of Dora the Explorer from Season 8.

Join Dora, Diego, and Boots for a sleepover at the museum that turns into a quest to return a cape to a castle, escape a giant, and break the spell on Prince Miguel!

Together We Can Break the Spell 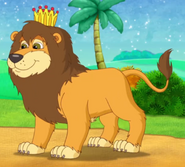 "Can you tell us about that painting, ¿por favor?"

Is the Windy Lake on the first or second path?

Together we can break the spell

Where can we find a unicorn, Diego?

"Lo siento, capa" he said to the cape.

To get the chinchilla to turn into a unicorn, say "¡Capa magica!"

What color comes next?

We made it across Rainbow Bridge!

"I'm going to keep looking for all the unicorns!" said Diego.

We had such an exciting adventure!

"Thanks for helping!" said Boots and Diego.