Dora's Ice-Skating Spectacular is the 10th episode of Dora the Explorer from season 8.

An evil ice-skating witch has stolen ice skates. Sabrina the Snow Princess tried to get them back, but she accidentally hurt her leg during her practicing against the ice-skating witch. So Dora and Boots must help get back the ice skates by winning in a skating contest.

Dora is going to practice skating.

The Ice Witch has a deal to make (she doesn't believe they can do it). If anyone can be her in a skating contest, she will give them back their skates.

Map Season 8 Episode 8
Map for this episode. So we have to go through the Icy Cave and down Pine Tree Mountain to get to Snowflake Lake.

To get to the cave, do we take the path with circles or triangles?

Is the mountain with the path con los circulos o los triangulos?

Skiing down the mountain.

We need to ski on the path with the higher number. There’s a nine and a five, which is higher?

Now there’s an eleven and an eight. Which number is higher?

Three numbers this time! Three, ten, and six! Which is the highest?

"She got passed the icicles, I see…"

"But can she skate down this mountain in just one ski?" The witch doesn’t think so.

The Ice Witch will go first.

Dora and Boots are so happy that the Ice Witch is now their friend!

Online game based on this episode. 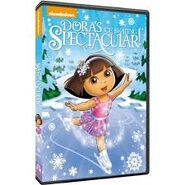