Dora's Hair-Raising Adventure is the 3rd episode of Dora the Explorer from season 6.

Dora takes Boots to a barber shop to get a haircut before posing for a photo to send to his mom.

Note: All these items are food. 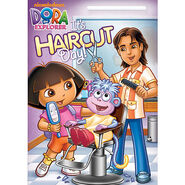 Retrieved from "https://dora.fandom.com/wiki/Dora%27s_Hair-Raising_Adventure?oldid=80217"
Community content is available under CC-BY-SA unless otherwise noted.