Dora's Great Roller Skate Adventure is the 5th episode of Dora the Explorer from season 8.

Dora and Boots use their magical talking roller skates to help other talking vehicles stand up to Big Wheeler in order to open the new skate park for everyone.

Boots with socks on.

Dora and Boots on roller skates.

Is the roller coaster on the path that's pink or blue? 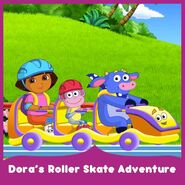 Is the big slide on the path that’s rojo, azul, o morado?

Dora and Boots on roller skates and Diego with his skateboard.

Dora, Boots and Diego stand up for themselves.

"Because I'm Big Wheeler!" he said.

The other roller toys stand up for themselves too. 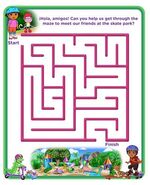 A printable maze used to promote this episode.