Start a Wiki
Dora's Easter Adventure is a Dora the Explorer Easter special. It is also the 2nd episode of Season 7.

Easter is as exciting as ever when Dora and Boots combine efforts to help rescue the Hip-Hop-Bunny's basket of eggs after Swiper swiped them.

The episode starts at Dora's House 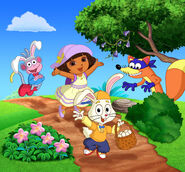 Retrieved from "https://dora.fandom.com/wiki/Dora%27s_Easter_Adventure?oldid=74560"
Community content is available under CC-BY-SA unless otherwise noted.