Dora's Dance to the Rescue is a Dora the Explorer TV movie. It's also the 18th episode for season 4.

Dora and Boots try to rescue Swiper the Fox from a magical bottle after getting tricked by a mean dancing elf. 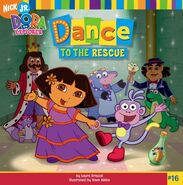 Retrieved from "https://dora.fandom.com/wiki/Dora%27s_Dance_to_the_Rescue?oldid=44754"
Community content is available under CC-BY-SA unless otherwise noted.