Dora tells a story where she and Boots try to rescue Swiper the Fox from a magical bottle after getting tricked by a dancing elf, by heading to the castle to attend King Juan el Bobo's dance contest and win one big wish to free him.

There are big waves in the ocean which caused Swiper to fall down in the water. Then a whale came out. Swiper tried to tell the whale to be careful not to swallow him. The whale didn’t hear him so he actually swallowed him! Now, the only way to get him out was if the Whale sneezed him out. So they called Backpack and Backpack had some pepper. The Whale sneezed out Swiper. While they’re sailing with the pirates, a Stormy Storm comes and tells them to get past him is to do the pirate dance. With the viewer’s help, they did so and the Stormy Storm is impressed and gives them pirate treasure. They wonder what‘s inside. They open it and their ride across the Ocean turned into a pirate party with balloons, cake, goody bags, streamers and music. Map tells them that so far, they walked through the pyramid, and sailed across the ocean. Now, all they have to do is to walk in the castle. Dora, Boots, and Swiper, they thanked the pirate piggies, and they got to the castle. When they approach the steps to the castle, a castle guard tells them that they can’t entering to the castle unless they have any fancy clothes. All hope seems to be lost, until Benny the Bull comes in his hot air balloon and gives them their fancy clothes. Boots wears a red bowtie and Dora is wearing a purple and pink gown with red stripes and purple flats. They went back up the stairs. The castle guard accepted their clothes and told them to go inside and King Juan el Bobo announces the start of the dance competition. Suddenly, the dancing elf showed everyone how good he is at dancing. He spins like a tornado and knocks over a few people. Boots told the viewer that the elf is mean, but he is still great at dancing. First, they dance like they got ants in their pants, then they dance like a fish. The dancing elf does all the dances correctly but Dora and Boots are able to keep up with them. King Juan el Bobo says it’s a tie between Dora, Boots and the dancing elf, then the king says that to win the contest, they are to make his mother dance but she says she doesn’t like dancing because she's just not good at it. King Juan el Bobo thinks that's very silly. Dora, Boots, and Swiper, gets everyone in the castle and even the King’s Mommy to dance and King Juan el Bobo declares everyone to be the winner and the guards and bringing their wish box that allows them to make their one big wish. Dora and Boots and wish for Swiper free from the magic bottle and he is free but the magic swirls around the dancing elf but Dora asks if the dancing elf can be free from the magic bottle forever and King Juan el Bobo accepted her request. The dancing elf apologizes for tricking Swiper and he is able to dance out of the magic bottle for good. King Juan el Bobo‘s mother dances with the dancing elf and everyone can dance in the castle dances happily.

Elf in the bottle

"An elf tricked me from letting him out of the bottle!".

We have to dance through the pyramid, go across the ocean, and that’s how we'll get to the castle!

Is the pyramid on the first, second, third, or fourth path?

There are three paths. Red (rojo), yellow (amarillo), and purple (morado)! Which colored path leads to the ocean?

Which item could be making Backpack sneeze?

Can you find some fancy clothes for Dora and Boots?

Those aren’t dancing flippers, those are scuba flippers! 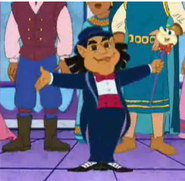 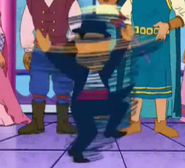 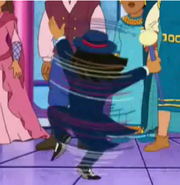 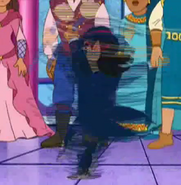 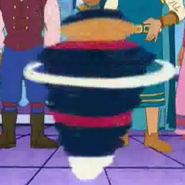 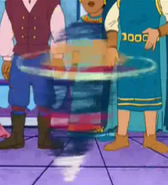 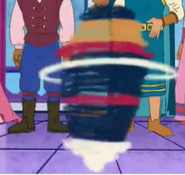 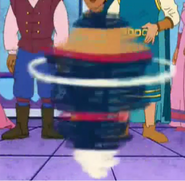 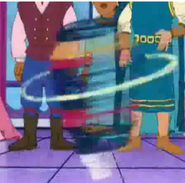 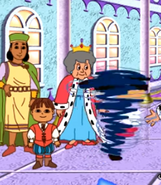 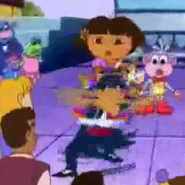 Wow, what a spin!

Video game by Atari based of this TV special

Retrieved from "https://dora.fandom.com/wiki/Dora%27s_Dance_to_the_Rescue?oldid=98526"
Community content is available under CC-BY-SA unless otherwise noted.