This article is a stub. Why don't you help Dora, Boots, and friends by expanding the page.

Dora's Big Birthday Adventure is a Dora the Explorer TV movie. It's also the 20th episode for season 5.

The episode starts with Dora and Boots in the magic story book they need to get home for Dora's 8th birthday so they can celebrate, but they end up in the twisty wind cloud to Wizzle World they go on an adventure back home for the party by finding the Wishing Wizzle and give him back his wishing crystal get past a mean witch who hates wishes. 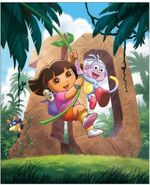 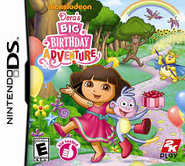 Dora and Friends the Explorer Cartoon ► Dora the Explorer Big Birthday Adventure!
Add a photo to this gallery

Retrieved from "https://dora.fandom.com/wiki/Dora%27s_Big_Birthday_Adventure?oldid=46418"
Community content is available under CC-BY-SA unless otherwise noted.