Dora the Explorer Wiki
Register
Don't have an account?
Sign In
Advertisement
in: Characters, Go, Diego, Go!, Males,
and 14 more

Dora's Night Light Adventure (Dora the Explorer)
Dora and the Lost City of Gold
Diego Márquez is an 8-year-old Latino action-adventure hero with a big heart. His goal is to save and protect the animals and their environment. Athletic and fearless, he is always at the ready no matter what the situation. Diego loves learning new things. He takes a scientific approach to problem-solving and also uses a variety of high-tech gadgets and gizmos to save the day.

Diego is Dora's cousin. Though it's never confirmed how they're related, they're presumably first paternal cousins considering they share the same last name (i.e. their dads are brothers). Like Dora, Diego comes from a family of three kids, with the three kids consisting of one son and two daughters. However, while Dora's the oldest kid in her family (her younger brother and sister, Guillermo and Isabella, are fraternal twins), Diego's the youngest kid in his family (he has two older sisters named Daisy and Alicia). While he's a minor character in his cousin's show, Diego's the host of his own show where the opposite happens (he's the main character and Dora appears as a minor character in her cousin's show).

Diego has dark-tan skin and brown eyes. He also has brown hair and wears a light blue shirt with a tan vest (which transforms into a long sleeve vest or a lifejacket and maybe even both), darker blue cargo shorts or green in dora the explorer, white socks, gray shoes, and a blue and yellow watch. However, starting in the fourth season of his show Go, Diego, Go!, he wears a short-sleeved red sweatshirt with an orange top underneath, black cargos, white socks, and black and red sneakers. Diego is seen wearing his previous outfit in a few flashbacks in the episode Fiercest Animals. In his debut, he wore a darker blue shirt with the same vest, green cargo shorts, green socks, brown shoes, and a silver watch.

Diego appears in several episodes of Dora the Explorer as well as every episode of Go, Diego, Go!. He had the major role except in "Alicia and Whitetail to the Rescue". His first appearance in general was in "Meet Diego!".

Diego has appeared on Dora the Explorer in the following episodes:

Diego in his long-sleeved vest 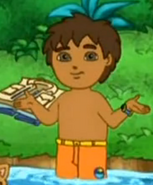 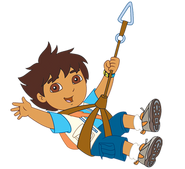 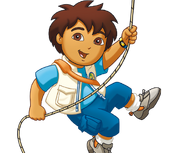 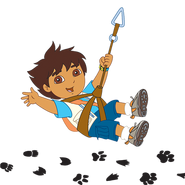 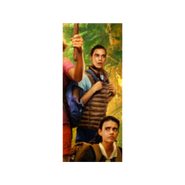 Diego in Dora and the Lost CIty of Gold 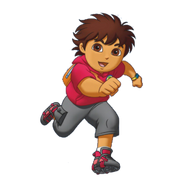 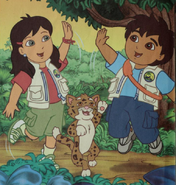