Daisy, La Quinceañera (also known as Daisy's Quinceañera) is the 2nd episode of Dora the Explorer from Season 4.

Dora and Boots were practicing dancing the mambo for Daisy's special Quinceañera, until a phone-call rang. It was Daisy in her birthday dress (white with petticoats), Daisy called them to bring her a special crown and shoes for the party.

This episode can be found in It's a Party! on VHS and DVD. 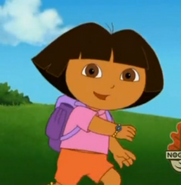 Swiper Disguised as a Duck.

Who’s inside that duck suit?

Wait a minute! A camel in the rainforest?!

Who’s inside that camel suit? 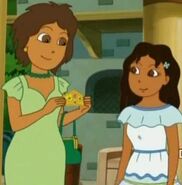 What was YOUR favorite part of the trip? 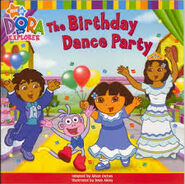 None in the actual episode; 3 in the credits

Retrieved from "https://dora.fandom.com/wiki/Daisy,_La_Quinceañera?oldid=99826"
Community content is available under CC-BY-SA unless otherwise noted.