Check Up Day is the 13th episode of Dora the Explorer from Season 7.

Dora is going to the doctor for her yearly check-up. When she gets there, she meets a few animals who are sick or injured and learns that getting a shot is not as bad as it looks. 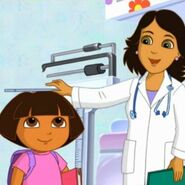 Retrieved from "https://dora.fandom.com/wiki/Check_Up_Day?oldid=78084"
Community content is available under CC-BY-SA unless otherwise noted.