Catch That Shape Train! is the 3rd episode of Dora the Explorer from season 8.

Dora and Boots create a shape train in their sticker book, and soon the train gets rolling without anyone behind the wheel.

We have to jump into the book and help Circulo

We don’t want to bump into the crocodiles! 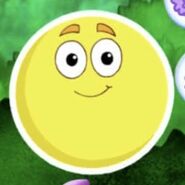 Do you see the Shape Train?