Boots to the Rescue is the 22nd episode aired on TV (or the 23rd shown episode, due to Dora's World Adventure being shown on VHS and DVD first) of Dora the Explorer from Season 4.

Dora has forgotten her music homework assignment, a song sheet with words and lyrics written in English and Spanish. Boots must find it in his room and hurry to school before it starts because if he doesn't, Dora will get in big trouble.

This episode can be found on the VHS and DVD title Musical School Days and the DVD (only) titled Let's Explore: Dora's Greatest Adventures.

This is Boots singing the I Speak Spanish and English song.

We have to find Dora's song.

Is this Dora's song?

Yes it is! You found it!

Boots has to go through the Up-and-Down Jungle, through the Robot House, and that’s how he'll get to Dora at School.

Do you see the Up-and-Down Jungle?

Look, the owl is arriba (up) and the rabbit is abajo (down).

Look, up in the sky!

Arriba, up! Abajo, down!

We went through the Up-and-Down Jungle!

Check! Where do we go next?

Is the robot house on the first, second, or third path?

We made it through the Up-and-Down Jungle,

check! And through the Robot House,

Check! Where do we go next?

Do you see the School?

Will you help Dora and Boots sing the I Speak Spanish and English song to the entire class?

DVD release
Add a photo to this gallery

This is the scene where Boots was singing Dora's song and mentions to the viewer that Dora is a great songwriter. 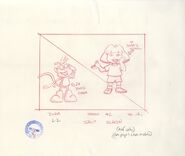 This is the scene where Boots calls Dora on the phone. (Note: If you look closely, the stamp reads the year "2003", which is proof that this episode was produced that year.)
Add a photo to this gallery

Retrieved from "https://dora.fandom.com/wiki/Boots_to_the_Rescue?oldid=90387"
Community content is available under CC-BY-SA unless otherwise noted.