Big Sister Dora is the 8th episode of Dora the Explorer from season 4.

Dora has some big news about her family. Her mom is pregnant! So Dora and Boots must rush to Dora's house to see the new baby.

Dora has some special news to share. Boots wanted to hear the news. Dora gives Boots and the viewer a hint. It sleeps in a crib, drinks from a bottle and gets rocked to sleep. Dora's mom is having a baby. Dora and Boots hold their hands together and jumped up and down in unison as they said "A baby, a baby, a baby!". Boots wonders if it's a baby girl. Dora wonders if it's a baby boy. They couldn't wait to find out if the baby is here yet. Dora tells Boots that her father gave her a phone to put inside Backpack to let her know if the baby is here yet.

Suddenly, "ring-ring-ring-ring, ring-ring-ring-ring". Backpack starts vibrating. Dora tells Boots the phone is ringing. Dora asks the viewer to look in Backpack for the phone. The viewer says "Backpack" and a flash of light occurs. The viewer had to play a listening game to figure out which shape the phone was hiding behind. The phone was behind the triangle. The viewer got a look at the other objects behind the other shapes. After that, Dora answers the phone. It was her father telling Dora to come home quick because her mother has the baby now. After the call, Dora puts the phone back inside Backpack. Dora and Boots had to hurry home to Dora's house to see the baby. Dora and Boots ask map for help. Map was so excited to hear that Dora's mom is having the baby and he too jumps up and down. Map says that Dora and Boots have to go through the spooky forest, through the nut farm to get to Dora's house to see the baby. Dora and Boots get going. On their way, Boots collects some bananas. After that, Dora does some helpful things like helping a baby bird get back into its nest. She helps 2 kids share the cookie by breaking it in half. And finally, she helps Big Red Chicken tie his shoes. Boots gives everybody a baby banana. Dora is going to be a big sister and Boots is a going to be a big monkey brother.

Suddenly, they see Isa the iguana. Dora and Boots tell Isa that Dora's mom is having the baby. Isa was surprised and they all grabbed hands and jumped up and down saying "a baby, a baby, a baby". Boots tells Isa that he's going to be like a big monkey brother. Isa plans on teaching the baby plants and animals. Dora and Boots tell Isa that they have to go through the spooky forest. Isa warns them that there are snakes and crocodiles on a sign. There was another sign that had the friendly frog. Dora, Boots and Isa had to figure out which path had the friendly frog. The viewer tells them that the 3rd path had the friendly frog. They go down the 3rd path. They saw snakes on the 1st 2 paths. Then, there were 5 paths. The viewer finds the friendly frog on the 5th path. Dora, Boots and Isa follow the friendly frog down the 5th path as they avoid the crocodiles on the 1st 4 paths. Soon after, they make it through the spooky forest. Isa knows that Dora will be a great big sister. Boots offers Isa a baby banana. Isa leaves.

Dora and Boots check map to figure out where to go next. Map tells the viewer they went through the spooky forest and a red check mark is placed. Map asks the viewer where Dora and Boots have to go to next. The blue cursor clicks on the nut farm after the path traces up to that place. Map tells the viewer to tell Dora and Boots that they have to go to the nut farm. Dora and Boots get going again. Boots gets out more baby bananas for everyone. After that, Dora and Boots see Benny. They tell Benny that Dora's mom is having a baby. Benny was surprised. Dora and Boots grab hands and jump up and down together saying "a baby, a baby, a baby". Boots tells Benny that he's going to be like a big monkey brother. Benny plans to give the baby a piggyback ride. Benny had a problem of his own. He couldn't put his go-kart together. Dora gets out the instructions. The instructions say that they have to put on the tires, push in the seat and put on the steering wheel. Dora, Boots and Benny twisted on their tires. Dora gets the last tire twisted for her side. Next, Dora, Boots and Benny push in the seat together. And Dora twists the steering wheel into place. In no time, the go-kart was built. Dora and Boots hop on Benny's go-kart with Benny in the driver seat. They put their seat-belts on. Benny puts his goggles on and then they started riding the go-kart towards the nut farm. Dora and Boots jump out and thanked Benny for the ride. Boots gives Benny a baby banana and Benny drives away.

Suddenly, Dora and Boots see Tico and his cousins. They tell Tico that Dora's mom was having a baby. "Un bebe" asks Tico. Dora responds "Yes, a baby" in Spanish". Dora, Boots, Tico and his cousins all grabbed hands. Then, they jump and down saying "un bebe, un bebe, un bebe". Boots tells the squirrels and Tico that he's going to be a big monkey brother. Tico plans on teaching the baby Spanish words. Dora and Boots can see that it's busy at the nut farm. All the squirrels are gathering their nuts. They have to be careful about crossing the street. Dora, Boots, Tico and the squirrels will know if the path isn't clear when the sign is "rojo" meaning red in Spanish. When this happens, they have to stop. If the sign is "verde", green, the path is clear and they can cross safely. The viewer saw a red sign which meant they have to stop. The sign flips around and it's now green. They look both ways and started walking together. There was another sign which was green. Dora and the others know that it's safe to cross. They look both ways and picked up speed to the next sign. The sign was red and when they got there, the sign flips around and it was now green. Dora and the others looked both ways and crossed safely.

Dora's Brother And Sister Sleeping In Their Bed 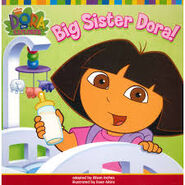 Retrieved from "https://dora.fandom.com/wiki/Big_Sister_Dora?oldid=45797"
Community content is available under CC-BY-SA unless otherwise noted.