Benny is a major character on Dora the Explorer.

A lovable six-year-old bull with a big heart. Benny speaks English and lives with his grandma in Benny's Barn. Benny is also a bit accident-prone. He once got stuck in a wall and his loud hiccups are famous. But Benny can always count on the viewer to get him out of a scrape.

Benny's body is mostly blue. He has white eyes with black pupils and wears a blue bandana with white polka-dots around his neck.

Benny appears in many episodes of Dora the Explorer. His first appearance was in the opening of The Legend of the Big Red Chicken. In "Return to the Rainforest," an episode of Dora and Friends: Into the City!, he plays an important role. 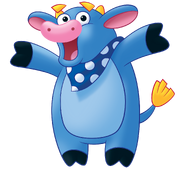 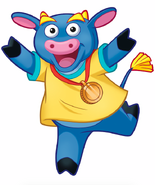 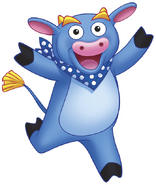 Retrieved from "https://dora.fandom.com/wiki/Benny?oldid=39429"
Community content is available under CC-BY-SA unless otherwise noted.