This article is about the episode. For the character, click here.

Backpack is the 16th episode of Dora the Explorer from season 1.

Dora tells us a story on how she first got her backpack.

Dora tells us the time where she first got her backpack. It all started when Dora was looking for her library books. She had to bring back all 8 books to library before it closes or they'll be late. Dora tries to carry all 8 books by hand but they were heavy. And that's when Dora's parents had something to help her carry the books to the library, it was a backpack. Dora thanked her parents and loaded the books inside her backpack. Dora puts on her backpack and gets a hug and kiss to her parents. She then tells Backpack that they had to get to the library before it closes. Dora left her house and her parents reminded her to use what backpack has inside. As Dora was on her way to the library, she hears somebody crying and it was Boots the monkey. He told Dora that he fell and got a booboo. So, Dora checks her backpack to see if there was something to heal Boots' booboo and they chose a soft bandage. She puts it on Boots' booboo, blows a kiss on her hand and pats it gently. Boots thanked Dora & her backpack. Dora explained to Boots that she had to get to the library before it closes. Dora & Boots noticed a map popped out of Backpack. They used it and Map told them that first they had to go across the troll bridge, next they had to climb over the Big Rock and then get to the library. On the way, Dora & Boots used an umbrella to keep dry from a rain cloud, safety scissors to cut through the troll's net, a rope to pull Boots out of a sea of icky sticky sand and some sticky tape to patch the rip on the rope so they can climb up the rock safely. They then slid down the rock. Suddenly, Swiper swipes Dora's backpack and hides her. Dora & Boots looked for Backpack by listening to the sounds. They found Backpack alright and she was in the tree. The library bell sounds and they had to get to the library before it closes for the day. They shout "abre" to the open the door to the library. They made it in on time and Val the Octopus was about to close the library. So, they got out the 8 books and they were returned back to the library in the nick of time.

This is Val with Backpack's books. 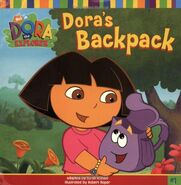 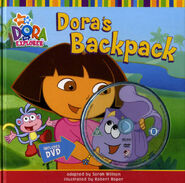 Dora at the beginning of the episode Backpack.
Add a photo to this gallery

Retrieved from "https://dora.fandom.com/wiki/Backpack_(episode)?oldid=38051"
Community content is available under CC-BY-SA unless otherwise noted.