This article is about the episode. For the character of the same name, click here.

Dora tells the viewers a story on how she first got her backpack and uses it from that day on. In the story, she and Boots must race to the library to return their 8 due library books before it closes!

Listen to the sounds 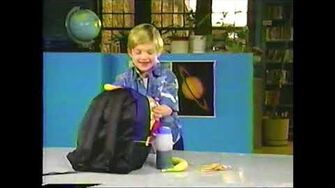 Retrieved from "https://dora.fandom.com/wiki/Backpack_(episode)?oldid=77217"
Community content is available under CC-BY-SA unless otherwise noted.