Jaguar (formerly Baby Jaguar) is a character from Dora the Explorer and Go, Diego, Go!.

Baby Jaguar has tan fur, with a brown pattern. His eyes are light brown with a black pupil. 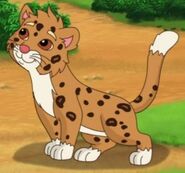 Jaguar as an adolescent.
Add a photo to this gallery
Retrieved from "https://dora.fandom.com/wiki/Baby_Jaguar?oldid=56598"
Community content is available under CC-BY-SA unless otherwise noted.