Baby Blue Bird is a small baby blue bird. She is the Big Red Chicken's friend who Dora and Boots find lost from her family in the episode "Lost and Found".

Baby Blue Bird's body is colored blue with light blue eyebrows, white eyes, black pupils, a light blue crest, and a light blue chest. Her talons are orange and her beak is yellow.

Baby Blue Bird from the episode "Lost and Found" 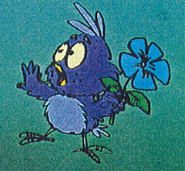 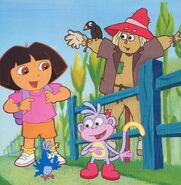 Add a photo to this gallery
Retrieved from "https://dora.fandom.com/wiki/Baby_Blue_Bird?oldid=92518"
Community content is available under CC-BY-SA unless otherwise noted.