Dora and the Lost City of Gold
Alicia Márquez is a main character from Go, Diego, Go! as well as the series' deuterogamist. She did appear Dora the Explorer though she mostly appears in every episode of Go, Diego, Go!. Alicia is Diego's older sister, however, not his oldest, as Alicia and Diego have an older sister named Daisy, making Alicia the middle child. She has high skills in technology, is more intelligent than her brother and sister, and is very protective.

Alicia is Diego's 11-year-old sister and resident computer whiz. She adores her little brother and is amazed at his natural gift for communicating and bonding with animals. Alicia is also protective of Diego and warns him of approaching dangers via his video watch from her monitoring position at the Rescue Center.

Alicia is mostly a peach-brown color. She has shoulder length brown hair and gray-green eyes. She is often shown wearing a red shirt, greenish-grey cargo shorts, a tan vest, a red bracelet, yellow socks and light gray and white shoes. Her ears are pierced with baby blue pearl stud earrings. Sometimes she wears a rescue pack like Diego. In the fourth Season of Go, Diego, Go!, She wore a blue short-sleeve hoodie with a light blue undershirt, a blue bracelet, khaki cargo shorts, white socks and blue shoes.

Alicia first appeared on "Big Sister Dora" on Dora the Explorer and made another appearance in "Dora & Diego in the Time of Dinosaurs". She mostly appears on every episode of Go, Diego, Go!. Her first appearance on Go, Diego, Go! was "The Rescue of the Red Eyed Tree Frogs".

Alicia as seen in the Go Diego Go kaleidoscope promo 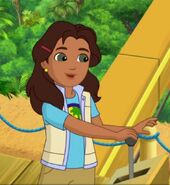 Alicia in Dora and Friends. 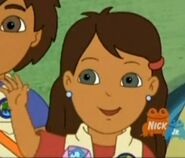 Alicia in Go, Diego, Go! 2009
Add a photo to this gallery
Retrieved from "https://dora.fandom.com/wiki/Alicia_M%C3%A1rquez?oldid=62707"
Community content is available under CC-BY-SA unless otherwise noted.