Grandma's House
Abuela or Abuelita Valerie in Dora and the Lost City of Gold, is the grandmother of Dora, Guillermo, Isabella, Alicia, Daisy, and Diego. It is unknown if she is the mother of Mami, Papi, Diego's mother or Diego's father. She was voiced by Socorro Santiago until Season 5, and currently by K.J. Sanchez.

Abuela has gray hair, has peach skin and wears a yellow dress. Her eyes are brown with black pupils and is seen wearing pink slippers. Her natural hair color is brown.

Abuela is a kind and caring grandmother. She is really good at cooking a chocolate cake. She would often give Dora gifts, as she gave her a star pocket in "Star Catcher".

Main article: Dora and the Lost City of Gold

Abuela is a recurring character and has appeared in some episodes of Dora the Explorer. Her first appearance was "Grandma's House". 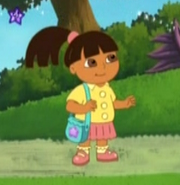 Abuela as a young girl
Add a photo to this gallery
Retrieved from "https://dora.fandom.com/wiki/Abuela?oldid=60457"
Community content is available under CC-BY-SA unless otherwise noted.