Start a Wiki
A Present for Santa is the 16th episode aired on TV (or the 13th shown episode due to it being shown on VHS and DVD first) of Dora the Explorer from Season 2.

On Christmas Eve, Dora and Boots head to the North Pole to deliver a present to Santa Claus.

While they were asleep, Santa brought out lots of presents to put under the tree. When they woke up, they were amazed to see that Santa brought lots of presents. They uncover the blanket to see if Santa got his present. However, they realize that Santa did not take his present with him. Dora and Boots went outside. Dora asks the viewer if they see Santa Claus. Dora and Boots see him from afar. Boots asks where he was going. Dora tells Boots that Santa was going home. Dora asks the viewer where Santa lives. The viewer tells them that Santa lives at the North Pole. Boots tells Dora that they got to give Santa his present and if they don't, Santa may not get any presents for Christmas. So, Dora and Boots had to figure out how to get to the North Pole. They ask Map for help. Map says that the North Pole is very far away. He tells them that they have to go up the snowy mountains, across the icy river to get to the North Pole.

Dora and Boots got going on foot to the icy river. Suddenly, they heard Swiper. Boots wonders if Swiper swipes on Christmas. Dora doesn't know for sure but they better be on the look out. Swiper was in a snowman suit and follows Dora and Boots. Every time Dora and Boots stop, Swiper stops. Dora and Boots examine the snowman who was following them. Dora tells Boots that she doesn't believe that it's just a snowman. Dora asks the viewer if it was just a snowman. The viewer says no. Then Dora asks the viewer who is it. The viewer thought it was Swiper and it was. Swiper comes out of hiding and swipes the present. Swiper was about to throw it away and hide it when Boots tells him that it was a present for Santa. Boots tells Swiper that if he and Dora don't give the present to Santa, Santa may not get any presents for Christmas. Swiper stops and thinks about what Boots said. Swiper felt bad and he gives the present back to Dora and Boots. Swiper runs away. Dora and Boots tell Swiper Feliz Navidad.

Dora and Boots were getting close to delivering Santa's Christmas present. They just have to get to the North Pole. The North Pole was so far away. Suddenly, the husky dogs and the husky puppy return as they bring out a sled. "¡Vamonos!" says the husky puppy. "Let's go" says Dora and Boots as they hop on to the sled. In no time, Dora and Boots reach the North Pole. Dora thanks them as the husky dogs leave. Dora and Boots approach Santa's house. Boots knocks on the door. Dora tells Boots that Santa is not here yet and must still be delivering presents. Suddenly, a group of voices say "A present for Santa, a present for Santa". Boots listens. the same group of voices say out the same sentence quietly and then they say out the same sentence out loud. Dora and Boots saw it was Santa's elves. 2 elves approach Dora and Boots. A boy elf says "Santa should be home soon". A girl elf says, "Listen, when you hear the jingle bells" and the boy and girl elf both say in unison: "Santa will be home". Dora and Boots listened for the sound of jingle bells. The viewer hears them and they heard it too. Santa was coming home. 1 elf tells Dora and Boots "you can put the present under the tree". All the other elves say, "Yeah! Put the present under the tree".

Items in this Backpack (clockwise starting from the top right)

Dora and Boots waiting for Santa.

Santa's present is lost in the snow 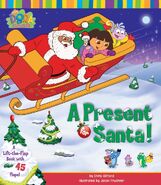 "This present is for Santa?! Oh, man!"
Add a photo to this gallery

Retrieved from "https://dora.fandom.com/wiki/A_Present_For_Santa?oldid=73934"
Community content is available under CC-BY-SA unless otherwise noted.