¡Por Favor! (translated in English as Please!) is the 8th episode (9th in earlier airings) of Dora the Explorer from Season 3.

Dora and Boots read a fairytale about a young kinkajou who is about to take his rightful place as the king for his 10th birthday. But the royal crown is magic and he can't get the crown down, so they must help him learn the magic words, "Por favor", to get it to come down. Unfortunately, from another kingdom, Sir Swiper is planning to swipe the crown so he can become Kinb, so they have to hurry before Sir Swiper swipes it. Can they do it?

Dora and Boots were about to read a story about a kinkajou and a magic crown. Boots really wants to hear it when he yelled "read me the fairytale!" twice and then a face appears on the book saying "what's the magic word?" Dora and Boots both say "Please" and the book says "...en Español?". Dora and Boots had to use the Spanish word for please which was "por favor". They tried saying it and it worked. Dora reads the fairytale. It all starts with Kinkajou coming out of his royal fairytale castle. He was kind and brave and everybody loved him including the dragon. A fanfare plays. Dora continues reading. The story continues where Kinkajou celebrates his 10th birthday and everybody came to the castle to watch him take the royal crown. The Fiesta Trio bring the royal crown to Kinkajou which was in a clear plastic container. But when Kinkajou tried to put on the royal crown, it shot itself up and it was out of the Kinkajou's reach. Kinkajou tried to jump up as high as he could to reach it while telling the royal crown to come down. He even tried yelling the Spanish word for "down" which was "abajo". Unfortunately, none of them worked, because it wasn't just an ordinary crown, it was a magic royal crown and will only come down if it hears the Spanish word "por favor". Kinkajou didn't know it and couldn't get his royal crown to come down. Kinkajou felt upset and everybody left with sadness. Meanwhile, in another kingdom lived a naughty fox named Sir Swiper who wanted to be king and so he set off to swipe the royal crown for himself. Dora and Boots decide to help Kinkajou by telling him that the magic words are "por favor", so they jump into the fairytale book. Now, they just have to find the quickest route to Kinkajou's castle. They check Map for help. He says that they have to go through the dragon's forest, over the drawbridge to get to Kinkajou's castle. He also mentions that not only they can catch stars along the way, but he also tells them to watch out for Sir Swiper. Dora and Boots get going and decided to practice using the magic words "por favor". Suddenly, an owl calls out for help and uses the word "por favor". Dora and Boots asked the Owl what is wrong. The Owl said that he got himself stuck in the net. They tried pulling on the net but it didn't work. So, they need something to cut the net. Dora checks Backpack for a cutting tool to cut the net. Backpack had a pair of scissors which was a tool used for cutting. Dora gets it out and with a snip-snip-snip, Owl was free at last and thanks them and some words of advice to Dora and Boots. He says: "On your trip, there's a lot in store, just remember to say por favor". Dora and Boots take Owl's advice and they get going.

And then, they got going to the drawbridge. Once they got there, they almost go overboard and saw crocodiles in the moat. Dora and Boots have to go across the drawbridge. Boots tells Drawbridge "Down, please". The drawbridge says "¿Como?". Dora tells Boots that Drawbridge speaks Spanish. So they not only had to "Abajo", but they also have to use the magic words after that. Dora and Boots tell the viewer to say "Abajo, por favor". The viewer did so. Drawbridge tried to lower its floor, but the chains got stiff and rusty. Dora and Boots needed a way to loosen the chains. Luckily, Sliparooni comes out of the star pocket. He adds soap and water to loosen the chains, so they don't get stiff and rusty. Once the chains were loosened, the Drawbridge can now lower its floor. Dora and Boots thank Sliparooni and then they immediately go across. Drawbridge raises its floor back up. Dora and Boots were getting close to Kinkajou's castle. They find it and got going again. Dora and Boots made it to Kinkajou's castle. Once there, they saw knights in shining armor blocking the castle door. Dora and Boots had to wake up the knights. They did so by saying "Wake up, por favor". Each knight woke up one at a time singing "Hola" and all the knights say "Hola" in unison. The knights move aside and open the castle door. Dora and Boots are going to see Kinkajou. The knights tell them: "His room is at the top of the stairs. Just look for the blue door". Dora and Boots listened carefully and entered Kinkajou's castle at once. One there, they see the blue door but no steps. Suddenly, there was a lion statue that says: "I am the lion of Wigamore. How many steps to the first floor?" Dora and Boots counted the invisible rectangles that lead to the first floor. They counted up to 9. "9 steps, por favor" says Dora to the lion statue and the lion statue made 9 steps appear. Dora and Boots climb up to the first floor. The lion statue says: "I am the lion of Wigamore. How many steps to the second floor?" Dora and Boots counted 7 invisible rectangles that lead to the second floor. "7 steps, por favor" says Dora to the lion statue. The lion statue makes 7 steps appear. In no time, Dora and Boots reach the blue door on the second floor. Kinkajou stares at his own window all sad until Dora and Boots come and tell him that they know the magic words to get his crown to come down. Kinkajou was glad that he is getting some help. However, Boots tells him that they have to hurry because Sir Swiper is coming. Kinkajou listened to Boots and he, Dora and Boots exited the castle. The fanfare plays. The people and the dragon return and hope that Kinkajou will ever get his royal crown down. "Time to crown the king, Hurry, Rapido!", the knights yelled. Kinkajou has to get his royal crown to come down. Dora and Boots have to tell Kinkajou the magic words to get his crown to come down and for Kinkajou to be king forevermore. Dora and Boots ask the viewer if he/she knows the magic words. The viewer tells them that magic words are "por favor". Kinkajou listened to Dora and Boots and realizes that he has to say more than "abajo". He says "abajo, por favor" and sure enough, the royal crown came down and landed on Kinkajou's head. Everyone cheered for King Kinkajou. Suddenly, Sir Swiper toots his trumpet and he is attempting to swipe the royal crown. The crowd gasps. Dora, Boots, Kinkajou and the crowd all say "Swiper no swiping" 3 times. Swiper snaps his fingers and he runs far, far away all the way back to his own kingdom. Kinkajou was now crowned king and it was all because he was taught the magic words, "por favor". Everyone cheers while confetti falls from the sky and Dora and Boots give King Kinkajou a hug.

Note: All these items are in pairs

This episode can be found in Super Babies, as well as Nickelodeon: Let’s Learn Kindness (both on DVD).

Meanwhile, from another kingdom, there lived a naughty fox named Sir Swiper.

"Who’s the guy you need to know when you gotta place to go? What’s my name?"

Dora and Boots need to find Kinkajou so they can tell him the magic words Por Favor! Do you see Kinkajou?

Uh-oh! Sir Swiper the Fox is heading for the castle! We better hurry!

To get to the castle, first, we go through the Dragon's Forest.

go across the Drawbridge.

And that’s how we'll get to Kinkajou at his castle!

Oh, stars! Try and catch stars along the way!

Do you see the Dragon's Forest? Is it on the first or second path?

What can we use to cut the net?

We went through the Dragon's Forest, where do we go next?

Do you see the Drawbridge?

We went through the Dragon's Forest and across the drawbridge, where do we go next?

¿Donde esta? Where is the Castle? 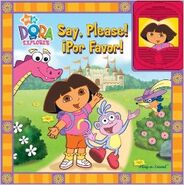 Book based on this episode.
Add a photo to this gallery

Retrieved from "https://dora.fandom.com/wiki/¡Por_Favor!?oldid=101258"
Community content is available under CC-BY-SA unless otherwise noted.